Good News in the Wilderness?

The Arts Council of Bakersfield, a city in central California, sponsors an event every month called First Fridays in a section of downtown that has wide sidewalks where local artists obtain permits to set up displays of their work.  The event fits in beautifully with the complexion of that part of the city, which is dotted with small art galleries, theatres, cafes, organic food shops, a doggie day spa and other specialty businesses designed to appeal to people with a bit of disposable income.  The artists reportedly enjoy very respectable sales on these days. 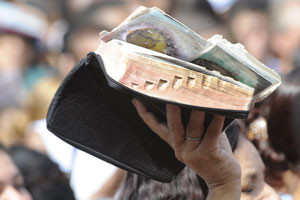 For most of 2015, however, visitors to First Fridays have had an additional experience while browsing at the corner of 19th and Eye Streets in the form of a 23-year old street preacher named Nathaniel Runels.  His preaching consists of standing on top of a small crate painted with the words “Jesus Saves” and preaching against the evils of moral sin.  He tends to center his attacks on traditional forms of sexual immorality and he delivers his messages at the top of his lungs as people pass, so they are forced to hear him whether they want to or not.  He is apparently acting within the confines of the law;  even though people have generally found him to be more annoying than inspiring, the police have not arrested him or even told him he can’t be that publicly disruptive.

Starting in early November, however, large crowds have gathered at the corner and attempted to shout down the self-described “open-air preacher.” Runels reports that he’s been spit on, had his clothes painted, and had water poured on his shoes, all in an attempt to get him to stop.  David Gordon, head of the Arts Council, is beyond frustrated. He’s heard complaints from vendors who say the preaching scares away customers and draws a mob at the corner that impedes traffic on the sidewalk and, at times, the street.  He says he’s tried working with Runels, suggesting the young man arrive to preach at 9 p.m., when First Friday ends, or move to a less busy corner — all to no avail.

Some have suggested that he be required to purchase a permit like other vendors since, even though they dislike his message, his sermons could be considered a kind of “performance art,” and “shouldn’t art challenge the thinking of those who interact with it?”  Others have said, “I guess he didn’t read the Bible where it admonishes people to pray in private, not on the street-corner for people to see.” Still others, including David Gordon, think he’s just doing it for the attention.  Gordon doesn’t want anyone getting hurt, he wants to avoid traffic jams at that corner and for his art vendors and First Friday guests to have a good experience.

Luke is very concerned in this section of the gospel to locate John the Baptist in a very specific historical context.  It is not just a vague “once upon a time” story, but a story that is fully immersed in the events and circumstances of its day, as the gospel should be.  John being out in “the wilderness” does not suggest that he is removed from the great movements of governments and armies that dominate the lives of the people.  Luke  wants to use the large-scale markers of time to draw attention to this seemingly small event.  He will do something similar – but with history rather than the current political landscape – at the end of chapter 3 when he situates Jesus in a long lineage of ancestors that stretches all the way back to Adam.

“The wilderness” in Luke’s gospel where John the Baptist is preaching is not just a miscellaneous spot in the middle of nowhere.   Luke tells us that John was preaching in “all the region around the Jordan.”  This area is filled with symbolic importance.  It is the place where, 13 centuries earlier, the Israelites crossed the Jordan river into the freedom of their promised land, so it represents a kind of starting-over place for people who want to move from bondage and slavery to sin into the freedom of God’s love.

Hence John’s baptism is a “baptism of repentance for the forgiveness of sins.” Unlike our American “wilderness” that is full of wild vegetation, the biblical “wilderness” is very dry and barren, so it is also thought of as a place of death, but not only death – it is also where life can begin again if it is watered.   It is also the place from where people believed the Messiah – Israel’s savior – would arrive to establish God’s rule once again in the land.  The theme of God’s chosen one entering the land from the east to bring peace and redemption was such a powerful idea that Isaiah envisioned even the land itself getting involved.

An internet search for aerial photos of “the Judean wilderness” reveals how barren and dry it is, but also how steep the climb is from the Jordan river to Jerusalem where the Israelite temple was.  The terrain is also very hilly between the Jordan river and Jerusalem at the top of the ridge.  Imagine all of that being flattened out and turned into a huge ramp for the Messiah to enter.  That is the image that Isaiah projects with the promise that hills will be brought low and the valleys will be lifted up.

That language about the hills and valleys also carries a symbolic meaning.  One of the great themes of Luke is that under the Messiah’s reign the lowly will be raised up and those who are high and lofty will be brought down.  This has already been shown with Mary, Jesus’ mother, in Luke 1.

When Luke says that John was administering a baptism of repentance for forgiveness of sins, we might have trouble visualizing that.  We should probably think of people walking through the Jordan river from its east bank to its west bank (reminiscent of the first Israelite crossing to freedom), stopping in the middle to have John pour water over them as a sign of God’s grace and a pledge that they will seek to live a life of constantly turning to God for all things rather than falling back into greed and despair.

God of salvation, we pray that just as you have revealed yourself in all times and all places, always bringing up the lowly and rescuing the lofty from their futile heights, reveal yourself to us again today in this world.  Bring all people to wilderness places, where they will see you and be claimed by your love in repentance and forgiveness of sins.  In Jesus’ name we pray.