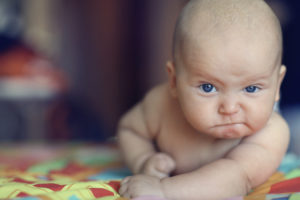 A psychological research study published in April of this year suggests that children, from a very young age, can recognize and respond to people exhibiting negative behaviors.  An experiment commonly labeled “bribing babies with graham crackers” reveals evidence that children, ages 1-8 have a tendency to avoid interactions with persons exhibiting certain behaviors.

Children often show acceptance of another person by their willingness to receive gifts from them.  In step one, children ages 5-8 were offered one sticker from one character and multiple stickers from a second character.  They had to choose from which person they would accept gifts.  Not surprisingly, the kids accepted stickers from the one offering more.  Step two presented the same situation, except character one was a kind person and character two was a bully who hit kids at school.  In this case, 80% of kids preferred to take one sticker from a nice person rather than 2-8 stickers from a mean person.

A similar activity involved one-year-old infants.  With two equal puppet characters offering graham crackers, babies also accepted the one who was offering more of the snacks.  However, when puppet #1 acted out, hurting a lamb stuffed animal, and puppet #2 helped a lamb stuffed animal, babies chose to receive fewer crackers from the good-hearted giver (puppet #2).  This research suggests that people can recognize right moral actions from wrong ones and choose to deal with people who act kindly and justly, even if it means a personal cost of fewer gifts.

How do young kids know right from wrong?  Have they learned already, or do they innately understand?  God said he has “written the law on their hearts…while their conscience also bears witness…” (Jeremiah 31:33, Romans 2:15, Hebrews 10:16).  As we see in the gospel reading, John the Baptist bears witness that God can see into immoral hearts, despite our efforts to hide our intentions.

In today’s passage, Jesus had not yet appeared on the scene at the Jordan River, but John the Baptist was busy preparing the people for His arrival.  John lived a life very different from the culture.  He ate locusts and wild honey in the desert and wore clothes of camel’s hair.  More important, he lived humbly as a servant of God, while some religious leaders lived greedy, self-promoting lives.  This stark contrast drew people to his message.

John’s message proved counter-cultural.  He proclaimed the coming of the Lord and called leaders and common people alike to repent of their sins and be baptized.  Many call him the first true prophet in 400 years.  His focus on praising God alone and boldly speaking the truth caught people’s attention.  He did not seek “followers of John” but rather people prepared to follow the coming Christ.  John’s message challenged those who lived self-righteous lives which looked good but were rooted in wrong motivations.  God desires that our obedience arise out of love for Him, rather than out of a desire to complete a checklist of superficially pious actions.  John baptized people to signify a person’s public confession of sin and repentance, an outward sign of inner cleansing of the heart.

Unfortunately, not every people group who visited John wanted baptism for the right reasons.  Some believed they were righteous without any need to change their attitudes.  They did not see their imperfection and looked down on “sinners,” treating others poorly and acting to promote their own interests instead of God’s.  John called them out, warning them that God has the power to save or destroy, and the way a person lives and acts reflects their inward beliefs about God.

We are called to live aware of our need for Jesus and to “produce good fruit,”(3:8) from the heart in response to all He has done for us.  Verse 10 of Matthew 3 states: “…every tree that does not produce good fruit will be cut down and thrown into the fire.”

The passage closes with a reminder than John’s baptism was to prepare people for Jesus’ coming.  Soon, the true Lord Jesus would baptize them also with the Holy Spirit., giving His life for others.

Lord Jesus,  we praise you for showing evidence of your coming throughout the Bible and through people such as John the Baptist.  Guide us to live lives that line up with your teaching and reflect our inner devotion to you and gratitude for all you have done for us.  Thank you for coming to save us.  In your holy name, we pray. Amen.