Have you ever experienced something for which there was no explanation?  What happened?  How did it make you feel?

In the past months two mysteries have made the national news and were all noted on the internet.  The first mystery happened in Le Roy, New York.  Twelve female students from Le Roy Junior Senior High (that’s not a mistake, both Junior High and Senior High must me in the same building or on the same grounds) began experiencing uncontrollable twitching movements and verbal outbursts.  The condition then spread to some adults too.  While the twitching was indeed real no one could explain what was happening…but they sure tried.  The school was checked for mold and chemicals but nothing was found.  Some psychologists stated that it must be stress that is causing the problem.  But in the end no one could explain what was causing the condition.  It remains a mystery.

The second is currently going on is Clintonville, Wisconsin where the residents were awakened by loud sounding booms that rattled their windows.  The event took place in neighborhoods all over town for about four days straight.  No one could figure out what was causing the booms and the city hired a company to explore what might be happening.  Again, people were quick to come up with possible explanations:  pipes were bursting underground or perhaps there were very small earthquakes under the city.  But in the end no one has yet explained what is causing the booms.  It remains a mystery.

Scripture Texts (NRSV) for Sunday, April 8, 2012 (Resurrection of our Lord)

Mark 16:1-8
(Text links are to Oremus Bible Browser. Oremus Bible Browser is not affiliated with or supported by the Evangelical Lutheran Church in America. You can find the calendar of readings for Year C at Lectionary Readings.)
For lectionary humor and insight, check the weekly comic Agnus Day. 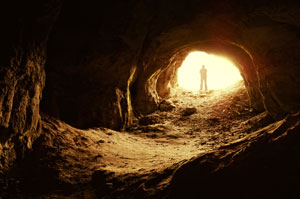 It is interesting to note that in all four Gospels it is the women who go to the tomb of Jesus and learn of the resurrection first, not the disciples.  In our text today the women are going to the tomb of Jesus to place spices in the tomb to try to overcome the smell of death.  However, they encounter a “young man” in the tomb who tells them that Jesus has risen.  The young man then instructs the women to tell Peter and the disciples that the risen Jesus will meet them Galilee.  Who is this young man?  No one knows for sure, perhaps an angel though Mark doesn’t tell us that.  It remains a mystery.

What happens next?  The women run out of the tomb and go immediately to the disciples to tell them that Jesus has been raised from the dead, right?   No, Mark tells us that “terror and amazement had seized them; and they said nothing to anyone, for they were afraid.”  When confronted with the mystery of the resurrection of Jesus the women react with amazement, terror, perhaps some joy, maybe doubt.  In other words the women react to the mystery the same way we react to a mystery.

And that leads to another fact.  If you look at the end of the Gospel of Mark in a Bible you might see that there are three endings to the Gospel.  One is the ending at verse 8 (our text) and then there is a short ending and long ending that were added by someone in the first or second century who couldn’t accept the mystery but had to have Jesus appear to someone in order to validate the resurrection.

I must say that I like the ending of Mark.  It is a strong proclamation of the fact that the resurrection is a mystery that cannot be explained (remember no one had risen from the dead before and no one has risen from the dead since Jesus!).  The resurrection of Jesus is a mystery to be entered into by faith.  Also, the ending of Mark’s Gospel begs the questions of where do we encounter the Risen Christ today?  To quote one theologian, “the risen Jesus is simply still ‘out there somewhere.’”

There will be some in your church or faith community who will not be able to attend Easter services.  Have your group purchase some Easter cards and send Easter blessings and the Good News that Christ is Risen to the shut-ins, those who are hospitalized or in the military, those in prison or treatment centers and others who you know cannot be there for the Easter celebration.

Risen Christ, we give you thanks that by your resurrection the power of sin, death and evil has been defeat and that out of sheer mercy and love you grant that victory to us.  We thank you also that the risen Christ is present to all generations to strengthen us and grant us the courage to serve you and our neighbor.  May our Easter worship and celebrations be worthy of the incredibly good news:  Christ is risen!  Christ is risen indeed!  Amen.

“Our Lord has written the promise of the resurrection, not in books alone, but in every leaf in spring-time.” ~Martin Luther