Do you believe miracles happen today or just in the Bible? 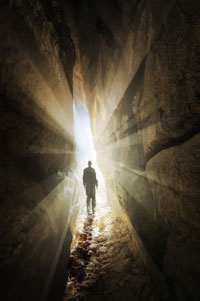 78 year old Walter Williams was a Mississippi farmer known as ‘Snowball’.  He died in hospice care on March 2, 2014. A nurse and a family member called the coroner to say that he had died.  Soon after Coroner Dexter Howard arrived and pronounced him dead at 9 p.m. He was placed in a body bag and transported to the local funeral home.  The coroner began to prepare the body for burial and then a surprising thing happened. The bag started to move.  There was kicking and breathing. Howard called the paramedics who came, found a heartbeat and took Williams to the hospital.

Coroner Howards calls it a miracle; others say that somehow an implanted defibrillator just below the skin on Walter Williams chest must have jump started his heart.  Williams’ daughter thanked Jesus in interviews for the extra time she received with her dad.  Williams, when interviewed, explained that he felt ‘a little weak’ but was talking and surrounded by family members.

Walter Williams lived for two more weeks in his home surrounded by family and friends who saw it as a miracle.  They report being overjoyed and thankful for the extra time.

Many confusing and exciting things take place in John 11.  Jesus knows Lazarus and his sisters, Mary and Martha.  They are referred to many times in the gospels.  Lazarus is known to Jesus as one “whom he loves.”  In this passage, Lazarus becomes ill while Jesus is away.  When a person finds out that one whom they love is sick, they usually rush to be at their side.  However, in this passage Jesus deliberately waits two more days, until Lazarus has died, to begin his journey.  The reader wonders why.

He asks where they have buried his body and they proclaim “come and see”.  This “come and see” is thought provoking because in the gospel of John it is frequently used as an invitation to pay attention and respond to what God is doing in Jesus. Jesus is moved (some say by grief, others suggest it is by frustration at the crowd’s blindness) and weeps.   Lazarus is buried in a tomb with a stone blocking the opening and Jesus commands him to “Come out,” raising  Lazarus from the dead.

In John’s gospel the raising of Lazarus solidifies opposition to Jesus and prompts the plot to kill him.  Many believed because Jesus did signs but, in some ways, they led to the events of Holy Week by forcing people to make a decision concerning his claims.

Play hide and seek with the Gospel of John.  Have the group race to search how many other references to “Come and See” and “I am”.  If your group is large enough have two teams, one searching for “I am” references and one for “Come and See” ask them to write the scripture reference on a white board when they find it.  Give the group 5 minutes to see how many they can find.

Dear Lord Jesus, you are the resurrection and the life.  We need not fear death because you are with us and you raise us from the dead.   We sometimes  find this confusing.  As you showed your humanity and compassion through weeping over your friend’s death, so too show us your compassion and empathy and sustain us in the dark times of life.  Thank you for your sacrifice. Amen.