When has fear kept you from saying or doing something you know you should say or do?

Every year, right around Easter, someone somewhere “discovers” something “new” about Jesus – his life, his wife, his death, his resurrection, his friends, his existence… etc. It’s at least as predictable and timely as the Easter Bunny.

Not long ago, someone found an ankle bone with a nail in it, in a tomb that dates to the time of Christ. This was, apparently, a big deal. (Except, of course, for the fact that a resurrected Jesus wouldn’t leave bones behind… because…resurrection….) 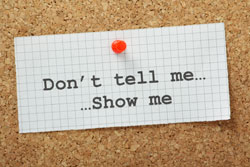 The truth of the resurrection cannot be “proven” one way or the other. The very concept defies all expectations, logic, and science. It’s something that is received by faith – and experienced in daily life.

This doesn’t keep us from trying to “prove” it’s true – or prove it’s not, depending on your persuasion. But one does wonder, for those of us who want to believe the resurrection matters; couldn’t we find something else to do with our time and energy other than search for “proof”? More important, what if the “proof” is found in living the resurrection – living lives that make it clear (to others and to ourselves) that Christ is Risen?

Resurrection of our Lord/Easter Day

“…and they said nothing to anyone, for they were afraid.”

These are the last words in the Gospel of Mark. (Yes, there are some more words in your Bible, but nearly every scholar in the world believes they were added much later by people who didn’t like how Mark ended his gospel.)

Let me say that again: These are the last words in the Gospel of Mark. “They said nothing to anyone, for they were afraid.”  No wonder later Christians added to the story. This is a most alarming ending.

Jesus has been raised from the dead. All the torture and terror of Holy Week is in the past. The One Mary, Mary, and Salome thought was dead is no longer in the tomb. You’d think that would be a story worth telling. But no: “They said nothing to anyone, for they were afraid.”

Why? Because “they were afraid.” Afraid of what? Afraid no one would believe them? Afraid it wasn’t really true? (After all – they didn’t see his body…) Afraid that the Romans who tried to kill Jesus would kill them, too, if they came out telling people he had survived?

All this – and more. Jesus told them this would happen (the resurrection). And the young man in white at the tomb told them to “go, tell…” But “they said nothing to anyone, for they were afraid.”

But here’s the deal: Mark is the oldest Gospel we have. It’s the first canonical story of Jesus written and preserved. And it ends with “they said nothing to anyone, for they were afraid.”

And yet… someone told someone. Obviously – otherwise, there would be no Gospel of Mark. Or any other Gospel, for that matter – because the other Gospel writers used Mark as their source.

Somehow, this story grew and grew until it came to unlikely losers like me and you. Somehow, their fear and our fear were no match for God’s Word of Life.

This gift cannot be proven. God got rid of the evidence. No body, no bones. Probably because God knew that even the most air-tight, scientific, logical case would still be hard for some folks to believe.

But this gift is told and shared and lived – Every. Single. Day. By people who are afraid, but still open to the idea that God might do something new. By people who thought they had given up hope, but God showed up and made a way out of no-way. By people who dare to whisper or shout about the good things God has done. This story is being told and lived and experienced – and has been for nearly 2000 years. Despite fear’s best attempts at keeping it all under wraps.

And thanks be to God for that.

Prepare a poster board (or other large piece of paper/foam board/etc.) with a rough sketch of an empty tomb (make sure there is lots of room inside the tomb). Using markers/pens/[colored] pencils/crayons and/or magazines/newspapers/scissors/glue, invite the youth to fill in the empty space in the tomb with pictures, words, stories of “resurrection.” Signs of hope and life – especially when it is surprising or unexpected. Help them find words and images to illustrate the gift of an empty tomb and a story to share. Write (or collage with letters) “Alleluia!” all around the edges.

Dear Jesus: You died and rose again so that we might always know that nothing will ever separate us from you and your love. Help us to be confident and bold in telling the story of your undying love and life. When we are afraid, strengthen us, for you know more than we do about everything. Help us trust you. Amen.