We are weary of their stories, their sameness, their sadness. We want to celebrate Easter but looking for Jesus in our broken world seems futile. The gospel challenges us to look harder.

The disciples think they are seeing a ghost, a supernatural being of some kind. To ease their anxiety Jesus asks for food so that, seeing him eat, they will see him as  their friend and not an apparition.

“The only way I can describe it, it looks like a demon.” Those were the words of Darren Wilson, the police officer in Ferguson, Missouri who shot a young African American man, Michael Brown. “It looked like a demon,. So, Wilson said, “I shoot a series of shots. I don’t know how many I shot, I just know I shot it.”   Not “him”, not “Michael”, not “a man”, a “person”, a “teen”, Darren, the man.  Wilson said he shot “it.”

Set aside the question of guilt and innocence, right and wrong for a moment to consider the nature of what transpired.  For some reason—denial, racism, PTSD, training, or lack of training— police officer Darren Wilson did not see Michael Brown. He did not a person, but a demon, not Michael, but an “it.” 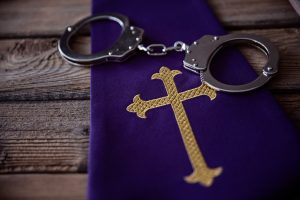 I spent the last four years of my career as a pastor working with ghosts, some would say demons. Like Michael Brown, they are each “other” or “it,”something unlike you and I. Some were called monsters or demons.  They were all inmate, prisoner, or con. Ghosts in khaki who walked the tiers of the South Dakota State Penitentiary.  They were stripped of their humanity by the system which knew them only by their inmate number or their crime. In becoming inmates they ceased to be men and became “other.” Other than human, like Michael Brown, they became other than like me.

The disciples  are“startled and terrified”, “disbelieving and …wondering.”  They watch as ghost becomes man, becomes human, becomes Jesus, the friend and brother  they lost only days before.

It’s a mystery. I watched every Thursday night for four years as 12-15 visitors joined 100 inmates in the chapel of the penitentiary.  It is jarring and anxiety producing to enter a prison, to be asked over and over again about cell phones and pocket knifes, tobacco and watches, chewing gum and shooting guns. Then the door to the sally port opens so you can enter. As the electronic gate slides shut behind you, you know what a sally port is without being told, a gate closed behind you, another closed in front of you. Then the same questions.

The gate before you slides open…through the lobby…up two flights of steps…another gate…more stairs and doors…and finally into the upper room, the chapel.  You enter a world unlike that which you just transversed. The smiling men, some bearded or tattooed, some your own age or younger. Others are your dad’s age, or your grandfather’s. You remember, some came to this place at age 14. Which ones?

The men join in the opening hymn, “I saw the light.” They are all singing, not only singing but singing the way you do in a car on the way to the lake with friends, full volume and deep feeling.

The service is much the same as in your congregation, other than that singing, of course. At least until the Passing of the Peace. Then it’s pandemonium, everyone on their feet, moving around the room and greeting visitors and inmates alike.  You realize, at some point, you have forgotten to be scared and are having fun, as the inmates greet you and thank you for remembering them.

Why do they thank you for remember them?  “It’s because most are not remembered,” the pastor tells you. Most of the men won’t have a conversation with someone from outside the walls who isn’t paid to be there until next week’s worship. It is a different world.  Prisons are full of ghosts, ghosts in khaki …until they walk through the door to the chapel.   Then 34816 is transformed into Robert who you saw baptized. 74869 is David, a beloved child of God. 28482 is John, he’s in the choir.

One of the miracles and mysteries of St. Dysmas* (The ELCA congregations located behind the walls  of the South Dakota State Penitentiary) is a first time visitor’s realization, “they’re just like us!”  They ARE us. We are ‘us.’ There is only one us, one kind of people, lots of variety but we are all alike when it’s all said and done. None of us is defined by the worst thing we’ve ever done.  Everyone who comes through the sally port the first time, inmates and officers, visitors and pastors, imagine they are different from them. Whoever they imagine the them to be.

In the seven Sundays of Easter Jesus repeatedly appears to disciples who fail to recognize him, who are filled with fear and confusion, with joy and disbelieving.  What can you glean from Jesus’ appearance to his disciples?

You are not a ghost, a child of a broken home, an irritant to your family, or a hopeless case. You are a beloved child of God.   God has had an eye on you from before the beginning.  God loves you and will never stop loving you—even if you dress in khaki one day.

God knows and God loves you, period.  You may not feel lovable,  and the truth is that sometimes we aren’t very loving to each other, or even to ourselves.  But God sees through all that. God knows us and God  loves us.

Jesus came to forgive. Jesus came to heal. Jesus came to raise us up from the deadness of our battered and broken lives, to breathe life into our despair.  Just as Jesus gathered broken people to become his disciples, God calls to you and speaks the same blessing, “Peace be with you.”

This week watch for times of “othering”—in your home, at school, in church and with your friends.  How Does Jesus appearance to his disciples encourage you to respond?

Jesus, help us to recognize those unlike ourselves as sisters and brothers. Break down our hesitancy and awkwardness in unfamiliar situations.  Inspire us to make connections and build bridges when your people are divided. Amen.