What is the greatest power in the world?  How did you come to your answer and why?

Just over one week ago, the Oscars were held in Los Angeles California.  While the televised part of the event covered the statues given, before and after the Oscars many special dinner events took place.  Famous chefs like Wolfgang Puck created outstanding meals for the celebrities and other “A-list” people. 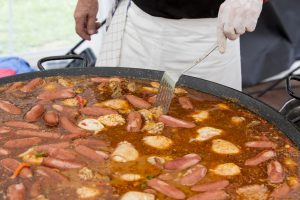 You see, it’s Chef José Andrés’ calling to travel wherever there is a disaster to serve up restaurant quality meals for those who are victims of tragedy.  It all began in 2010 when, in response to a devastating earthquake in Haiti, Chef Andrés founded the World Central Kitchen, with the purpose of providing healthy food to the survivors of that earthquake.  Since then, World Central Kitchen has organized and served meals wherever a tragedy has happened around the world, including in the United States and Puerto Rico.

Chef José Andrés doesn’t brag about his volunteer work (though well he could, it’s so important).  He is a humble person who serves by doing what he can, where he can.  That doesn’t mean his work is not noticed by others who join him to make and serve meals.  As Chef Andrés was preparing to go to Poland, Amazon’s Jeff Bezos donated $100 million dollars, which Andrés will use in his humanitarian effort to assist the Ukrainians.

Sunday of the Passion/Palm Sunday

When a king or president comes to a town it is often a very big deal.  In ancient times a king arrived riding a large impressive stallion surrounded by armed soldiers as a sign of might.  Banner bearers carried the crest of the king’s family and trumpeters blew their horns to announce the king’s arrival and to draw everyone’s attention to the king’s presence. The image suggests grandeur, importance, power, and might.

In light of that, it may seem strange that Jesus rode into Jerusalem for the last time on a colt (or a donkey as is often pictured).  The donkey has been a work animal for thousands of years and, since Jesus used every day examples and items to proclaim God’s kingdom, it makes sense that he would use an ordinary animal to make his entrance to Jerusalem.  Also, being as well versed in Scripture as he was, Jesus may have been intentionally trying to bring to mind a passage from the Prophet Zechariah, “Tell the daughter of Zion, look, your king is coming to you, humble, and mounted on a donkey, and on a colt, the foal of a donkey” (Zechariah 9:9).

There were no banners or trumpets, no show of military might and no bodyguards.  The people following Jesus were not the beautiful people of the day, but ordinary folks. They did greet Jesus as a king saying, “Blessed is the king who comes in the name of the Lord! Peace in heaven, and glory in the highest heaven!”  The image speaks loudly that Jesus is a humble king riding a humble animal.

The clash of those two images, those two kings, will play out the entire week of Jesus’ passion.  There is the power of the Chief Priest, Herod and Pilate, in contrast to the humility of Jesus.  In the gospel of Luke, humility is a quality Jesus lifts up for the disciples then and now.  In part of our reading for this week, when the disciples argue among themselves as to who is the greatest, Jesus encourages them to be humble and to be servants (Luke 22:24-27).

In today’s scripture from Philippians, Saint Paul writes, “Let the same mind be in you that was in Christ Jesus, who, though he was in the form of God, did not regard equality with God as something to be exploited, but emptied himself, taking the form of a slave, being born in human likeness. And being found in human form, he humbled himself and became obedient to the point of death—even death on a cross.”

When these two kingships collide, it appears that power and might win over humility and love, but we know the truth.  In the resurrection, Jesus becomes the victor.  As disciples of Jesus we are called to follow Jesus’ way of humility, love, mercy and peace.  Those virtues still win the day…every day!

Loving Jesus, throughout your life you sought to be humble and loving and to teach your disciples and followers to do the same.  As we enter into the week of your passion, assist us to learn from you and to trust in God in all things.  Bless us in the week ahead. Amen