A few weeks ago, a researcher posted a video which proves that fish, don’t simply get caught, sometimes they do the catching.  Take a look at this video of  a fish catching a flying bird.  Do you think it is real or a fake?

Are We Running Out of Fish? 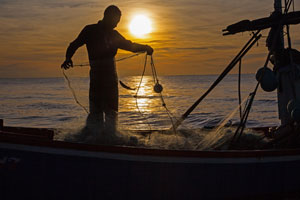 According to the U.S. Fish and Wildlife Service, over 33 million adults in the United  States go fishing during the course of a year.  For many of those individuals, fishing is a source of relaxation and entertainment, but fishing is also a vital source of food for families around the world.   A study produced by the U.N Food and Agriculture  Organization revealed that the worldwide fish harvest in 2012 amounted to nearly 90 million tons of fish.

Given the amount of fish being caught in the oceans and harvested from fish farms on a yearly basis, there is genuine concern in some areas that over the next 50 years, the world’s fish population will diminish to dangerous levels.   Some groups like the World Wildlife Federation are working to raise awareness of the dangers of  poor management of fishers, overfishing and destructive fishing techniques which they claim have put over 53% of the world’s fisheries at risk (http://wwf.panda.org/about_our_earth/blue_planet/problems/problems_fishing/).  Other groups, like Marine Stewardship Council  are working with fishers, retailers, processors, and consumers to encourage practices which safeguard the world’s oceans and create sustainable supplies of fish and seafood.   Hopefully by raising awareness and encouraging good stewardship of the world’s fish stocks, oceans, lakes and rivers,  there will be an abundant supply of fish to meet the dietary and economic needs of our ever growing world.

When most of us think of fishing, we probably think of a person either sitting in a boat holding a rod with a single line in the water or we think of a person standing in the edge of a stream, casting a bait covered hook into the water.  Unless you happen to be a part of a commercial fishing operation, very few people today would describe fishing as something you do with a net, but in Jesus’ time things were a little different.  For Peter, Andrew and the other fisherman around the Sea of Galilee, fishing meant casting a wide, broad net and pulling in whatever the net touched.  Fishing wasn’t about gathering one fish at a time.  Fishing was about  gathering as many fish as possible with the cast of a net.  When Jesus says to Peter and Andrew “Follow me, and I will make you fish for people,” he is inviting them to join him in a ministry that will cast out a broad net and potentially touch the lives of countless people.

Loving God, you call us to follow you and fish for people.  Inspire us to be your hearts and hands and voices in the world and help us to use the gifts you have given us to make your love known to the world.  Amen.