Voting for the First Time

For a moment, my home state was in the political spotlight. Literally. I walked into Lakefront Brewery (it was a work meeting, honestly!) and Chris Matthews and a crew from MSNBC are broadcasting live. Wisconsin had the only primary in the country on Tuesday, April 7. The frontrunners were expected to lose. There was a lot of talk about momentum pushes, brokered conventions and the almighty delegate counts.

In addition to the presidential primaries there were also many general elections. There was a state supreme court election and dozens of municipal elections. I live in Milwaukee where the sins of the city are legion: most segregated city; highest achievement gap; highest incarceration rate for black men; 5th poorest city; international hub for human trafficking; worst place in America to be black. We’ve had a breakdown in police-community relations as officers sexually assault citizens during unwarranted body cavity searches; a citizen calls 911 and the responding officer rapes her; issues of excessive force; racial disparity in traffic stops. The Black Lives Matter movement has rallied around the killing of Dontre Hamilton.

Yes, there are also amazing things happening in my city. There are incredible assets among us. We are making strides in multiple areas of justice. But even as someone who operates from the conviction of abundance rather than from the despair of what is lacking, there is a clear reality check: things here are bad. This ish is messed up.

When the votes were counted and winners declared, all but 1 incumbent in Milwaukee city and county elections won. This was a clear affirmation of the status quo.

Let me be clear – I like some of these incumbents. I work with them. But let’s remember – this ish is messed up. And the voters had a chance to elect some change but opted not to do so.

It is enough to make me think maybe rallying from the despair is a better plan. Politicians always go negative. It is a clear motivator. They do it because it works.

My congregation is deeply political. We are not partisan but we do not shy away from issues that affect our members and our city. Political and electoral solutions are never the only solution, but they are often a part of the solution. We register voters during worship. We preach about voting and pray for voters. We have candidates engage our congregation around issues. We march in the streets. We meet with legislators. We partner with faith-based organizing groups. We partner with secular advocates for workers rights. We aren’t just down with the struggle, we’re deep in it.

So in the midst of what was a depressing electoral outcome, an amazing thing happened. Sabryna, newly 18, was going to vote in her first election. And I as her pastor was invited to share that moment. A little after 8 am, I picked up Sabryna and her mom, Anna. We share the same polling place and we all went to vote. Anna was voter 100. I was 101. Sabryna needed to register so she was a little further down the line. But here were three folks, voting blocks from our congregation. We went to the polls together. The church rejoiced as a member marked this rite of passage in American democracy. We embodied #ELCAVotes.

Voting for the first time. 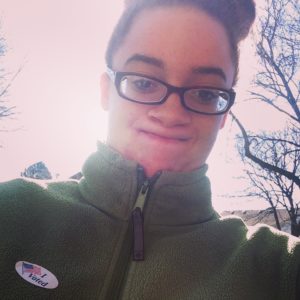 All Peoples Church member Sabryna, takes a selfie after voting for the first time.

Pastor Steve Jerbi, Sabryna and her mom Anna at the voting polls in Milwaukee.

Our Lutheran tradition teaches us we need to engage deeply in the world, not retreat from it. We can’t fulfill our baptismal covenant to strive for peace and justice in all the world by opting out. We can get frustrated with the outcomes but we cannot become so discouraged that we don’t show up. We go to the polls because it is one of the tools of change and we don’t leave our tools unused.

Voting wasn’t the mechanism to bring a change in political leadership to Milwaukee. This inspires our congregation to explore the other tools available to us. We can identify other assets. We will organize, educate, and advocate to change the statistics and more importantly the lives in our city. And come time for the next election, Sabryna will be ready to use the power of the vote again.

Rev. Steve Jerbi, is the senior pastor at All Peoples Church in Milwaukee, WI. He earned a Bachelors of Arts from the University of Montana – Missoula in English Literature with an Environmental Studies minor. He graduated from the Lutheran School of Theology at Chicago with a Masters of Divinity and an environmental ministry emphasis. Pastor Steve is a passionate leader in youth and cross-generational ministry and the interconnected work of racial, economic and environmental justice. Pastor Steve along with his wife Jennifer are raising two grade-school daughters.