On November 11, the ELCA Church Council approved revisions to “A Declaration of the Evangelical Lutheran Church in America (ELCA) to the Jewish Community”* as an expression of this church’s continual opposition to rising antisemitism. The revisions specifically named the anti-Jewish “incitement to violence” that is far-too-often realized. We  think of Pittsburgh and Poway, but also the daily acts of violence experienced by our Jewish neighbors that go unnoticed, underreported, or ignored. The point is that antisemitism is not simply a harmful, derogatory idea about Judaism, but a disastrous and sometimes deadly force in the world against our Jewish neighbors that we need to guard against — in ourselves, in our church, and in the world around us. For this reason, the action taken by the Council included not only the revisions but a call for the church to enter into a time of study and reflection using the Declaration and other Lutheran-Jewish resources available from the Office of the Presiding Bishop.

By design, the Declaration provides a measure of accountability within the ELCA, and to this church’s Jewish partners. (One of our dear Jewish partners has a framed copy of the Declaration on her office wall!)  As Lutherans – through the Lutheran World Federation, our predecessor bodies, and the ELCA, we repudiate the troubling legacy of Luther and our complicity in the unique horrors of the Holocaust, and the ongoing scourge of anti-Jewish bias, bigotry, hatred, and violence. To be clear: this requires more than just declaring our intentions, but acts of daily repentance and renewal lived out in community, and through intentional relationships with our Jewish neighbors.

At the same time, the ELCA is living out its accountability with others. In September of this year, the Church Council adopted “A Declaration of the ELCA to American Indian and Alaska Native People” as a step in the implementation of the church’s 2016 Repudiation of the Doctrine of Discovery. The newest ELCA Declaration concludes with the acknowledgement that, “we understand that no document, no matter how carefully crafted, will accomplish the actions of truth and the work of justice as it relates to our American Indian and Alaska Native siblings. We also understand that what has developed over hundreds of years will take enduring commitment to address.” The church’s history – and its ongoing witness – cannot be made right simply by declaring it was wrong.

This brings me to the second part of the revisions recently adopted to “A Declaration of the ELCA to the Jewish Community.” The text adopted in 1994 began, “In the long history of Christianity there exists no more tragic development than the treatment accorded the Jewish people on the part of Christian believers.” The superlative in this original sentence unintentionally invites false comparisons – between the Holocaust perpetrated against the Jewish people and the genocide perpetrated against Indigenous People, between rising antisemitism and anti-Indigenous racism to name two examples. Instead, what we should be looking for are the deadly connections: the complicity of the church, the political and theological justification of sinful ideologies, the ongoing perpetration of bigotry, violence, and even death against those deemed inferior, unworthy, expendable, or less than human by the dominant (and dominating) culture. To this end it now reads, “In the long history of the church, the treatment accorded the Jewish people by Christians has been among our most grievous and shameful legacies.” These connections will help us see more clearly the truths we need to tell in order to heal, and the work we need to do to guard God’s vision of life abundant for all people and creation.

I give thanks to God for the courageous people, including the late Rev. Dr. Franklin Sherman, who was instrumental in the development of “A Declaration of the ELCA to the Jewish Community” in the 1990s, and to the late Rev. Dr. Gordon Straw, who challenged the church in 2018 to take seriously the church’s repudiation of the Doctrine of Discovery, including in the context of our Jewish relations. Even in blessed memory, they have helped us to see that sometimes even correctives need correcting.

*Written by the ELCA Consultative Panel on Lutheran-Jewish Relations and adopted by the ELCA Church Council in 1994 “A Declaration of the ELCA to the Jewish Community” repudiates Luther’s anti-Judaic writings, opposes anti-Semitism, and expresses the ELCA’s desire to build right relationships with the Jewish community. 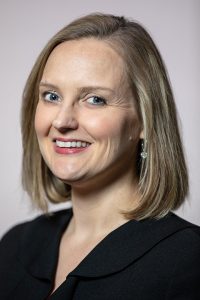