Introducing “A Declaration of the ELCA to the Muslim Community”

On March 31st, the ELCA Church Council adopted “A Declaration of the ELCA to the Muslim Community,” uplifting our commitment to friendship and solidarity with our Muslim neighbors.

The idea that the ELCA should develop “A Declaration to the Muslim Community” has been around for some time, especially since the Reformation commemorations of 2017, when there was renewed focus in a variety of forums on Luther’s attitudes toward the religious Other. After the adoption at the 2019 ELCA Churchwide Assembly of “A Declaration of Inter-Religious Commitment,” the Lutheran-Muslim Consultative Panel began in earnest to discuss the need and possibility of such a document.

At the Panel’s last in-person meeting on February 22, 2020, we decided that the time was right: Muslim friends were asking for such a statement; the LWF Assembly in 2017 had committed itself to working towards a statement on Lutheran-Muslim relations, but had encouraged the ELCA to develop its own and to offer it to the LWF as a contribution; and, of course, acts of discrimination against Muslims (e.g., the so-called “Muslim ban”) and violence (think of the Christchurch mosque shootings of 2019) were heavy on our hearts and minds. Even then, we were wondering what the 2022 US election season might bring (remembering the ”Ground Zero Mosque” and Qur’an burning controversies of 2010, and the “Muslim ban” of 2016).

Work on a preliminary draft of a statement continued into the pandemic but stalled for a time. But last October (2021) we made a fresh start, asking Panel members and a few Muslim friends and colleagues to name just two or three things that should be included in a possible Declaration. The collected responses provided a remarkably coherent roadmap, and a series of focused Panel meetings led to the statement that you now have before you.

I would like to make a few comments about this Declaration:

The final draft of the document was reviewed by several of our Muslim partners, by Bishop Eaton, and by the Ecumenical and Inter-Religious Committee of the Conference of Bishops and by other key partners within the ELCA.

Over the coming month, during the holy season of Ramadan, we will be sharing this declaration with our Muslim partners and neighbors, and invite you to join us in this effort.

I want to close by acknowledging the members of the ELCA’s Consultative Panel on Lutheran-Muslim relations, which was entrusted with the development of this Declaration: panel members Prof. Jonathan Brockopp; Dr. Carol LaHurd; Prof. Paul Rajashekar; and Prof. Nelly van Doorn-Harder; ecumenical representative Dr. Peter Makari; and churchwide staff: Dr. Kathryn Lohre, along with the Rev. Dr. Carmelo Santos and Ms. Kristen Opalinski. It’s been an amazing team: intellectually stimulating, passionate, unafraid of disagreement, every one with extraordinary experience and contacts among Muslims and others. 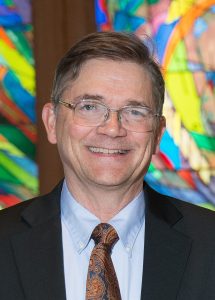 A Holy Confluence: A Reminder of our Interconnection |