My name is Megan Bradfield, and I serve as the associate director of international disaster response for the ELCA.  Welcome to the ELCA Disaster Response blog!

My colleagues and I will be using this blog as a way to share information with you, for now primarily about the unfolding relief efforts in Haiti continuing with on-going information on other disaster response topics from the US and around the world. 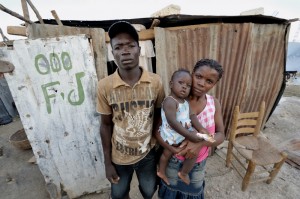 A family in the Haitian village of Dabonne stands in front of the temporary shelter they built following the destruction of their home in a January 12 earthquake. They used old lumber salvaged from the ruins of their previous house. Photo by Paul Jeffrey/ACT.

In the near future, you will be meet Louis Dorvilier here on the blog.  Louis is the director of international disaster response and a native Haitian.  He is currently using his expertise to serve his native Haitian community, working on a team from the Lutheran World Federation and Action by Churches Together (ACT) Alliance, which the ELCA is a member of.  Among other things, Louis is working to assess the situation in Haiti, define assets of LWF and other partners, and coordinate plans to restore daily life to those that have been affected by this tragedy.

Last Friday, we sent out an update on the situation in Haiti and how we are currently working there and in the US.  (Click here to see the full report.)  Here are a few highlights:

I invite you to subscribe to our blog (using the box on the right-hand side of the page), and join us to keep up-to-date on the work of the ELCA.

Keep the people of Haiti and caregivers responding to this disaster in your prayers!