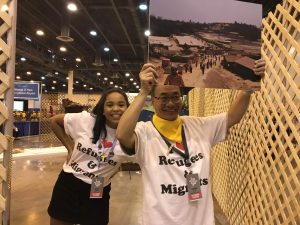 Working at the refugee and migrant section at the ELCA youth gathering was an incredible learning and teaching experience for me. First and foremost I learned about the experience of the Rohingya refugees but what was so impactful to me was learning from a colleague who had actually visited the refugee camp in Cox’s Bazar, Bangladesh. This colleague could explain so vividly what life was like in one of the world’s largest refugee camps, and frankly it was gut wrenching. The life of a refugee is a difficult thing to fathom and can make those of us who are privileged feel uncomfortable. Everyday tasks like cooking food become challenges when you don’t have easy access to the materials needed to start a fire. I wanted to communicate the differences in everyday tasks to the youth who came through the experience, so they could begin to understand a life that seemed so foreign to many of them. The reason they come to the camp also feels foreign, when young people think ethnic cleansing seems like something that only happened a long time ago.

After coming back from a semester abroad in the former Yugoslavia, I was exposed to the ethnic cleansing and civil war that took place in Bosnia in the 1990’s. When I visited the site of the genocide in Srebrenica in 1995 where more than 8,000 Muslim men and boys were killed, what struck me most was how recent this was. There were even photos and color videos to look at. I have tended to think of genocide as something that only lives in the history books. I knew that the few people still on this earth who had survived a Nazi concentration camp were very old and entering their last stages of life. But at Srebrenica, the guide at the visitor center and museum revealed to us that he was a survivor of the ethnic cleansing. I remember feeling so shook up, because I realized that genocide is not a thing of the past. Hearing him talk about that week in July of 1995 was one of the most moving experiences in my life. In 2018, 23 years after the genocide he still has no definitive answer to what happened to his brother and explained to us that he is still “missing”.

I went into the experience at the youth gathering hoping to help the young people and adults have even a fraction of the breakthrough I had at Srebrenica. Helping them realize the harsh realities of the world we live in and that horrible things still happen. From personal experience, I knew how hard these harsh realities could be to digest. So I spoke with a colleague who helped me think of a way to make this into a positive learning experience for the youth – hope. She encouraged me to communicate the hope that the Rohingyas have despite their current circumstances and the hope we should have that the situation improves for them. A way I encouraged the young people to act on that hope, was to pray for the refugees. I urged them to turn their discomfort and frustration into action through prayer, and hopefully prayer can help us to find peace despite the difficult circumstances.

Kayla Cooper is an Intern with Community Development Services at the ELCA Churchwide Office in Chicago. She attends Gettysburg College in Gettysburg, PA where she is majoring in Globalization and French.

Continue to pray for all those impacted by conflict and forced migration.