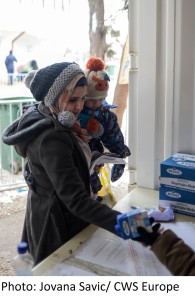 By the end of December 2015, more than a million migrants and refugees crossed into Europe, according to the International Organization for Migration, with more than half coming from Syria. More than 3,500 refugees and migrants lost their lives in the Mediterranean Sea in 2015, reports say. The scale of the current refugee crisis in the Middle East and North Africa is unprecedented in recent times. The UN estimates more than 15.5 million people in those regions (Syrians, Afghanis, Iraqis, Palestinians, and others) have been displaced by violence.

In an update from Jovana Savic, Church World Service-Europe Senior Program Manager, we learned that hundreds of thousands of refugees have passed through the registration center in Presevo, Serbia – the entry point for refugees passing through Serbia from Macedonia. Jovana said, “I have been organizing CWS’s response to the refugee crisis in Europe since September, and I have seen hundreds of families come through Presevo. Thousands of faces, each with a story to tell.”

She goes on to speak of three young women, Hala, Bothain, and Nadia, who have been traveling together. They are traveling to seek asylum in Germany. Jovana said, “I asked about their hopes, and their responses were both simple and human. They want the same things that have been taken from them and that we take for granted, including security, happiness, and a sense of normalcy. In the meantime, though, they just want to rest and forget the sounds of war that are all too familiar.” 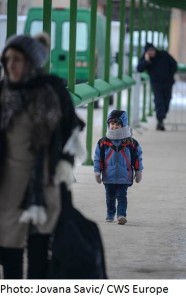 In Matthew 11:28 Jesus says, “Come to me, all you that are weary and are carrying heavy burdens, and I will give you rest.” The Lutheran Disaster response recognizes that, as part of the body of Christ, we must provide rest for those who are seeking. To date, the ELCA has received $834,000 for the Refugee Crisis. $50,000 was given to Church World Service in Serbia, partnering with the International Red Cross for food, sanitation items, and helping with emergency winter shelter.

With the help of ELCA members, in addition to Serbia, we’ve given $55,000 to Hungarian Interchurch Aid for immediate emergency needs; $50,000 to the Za’taari refugee camp in Jordan to help improve conditions; $60,000 to Lutheran World Federation for assistance to refugees in northern Iraq, and now an additional $70,000 to Lutheran World Federation for vulnerable women and children refugees, in Jordan, outside the camp for education and cash assistance.  We continue to explore ways to be involved in the crisis, including pending funding for efforts in East Central Europe and the Middle East.

Here is how you can be a part of the ELCA’s response:

Please pray for all those affected by the refugee crisis. Remember those who have lost everything and all those who are working to respond. You can use these prayers and resources in your worship services.

Your gifts are needed now to help with immediate relief. Gifts designated for the Middle East and Europe Refugee Crisis will be used in full (100 percent) to assist those directly impacted and have fled for safety.