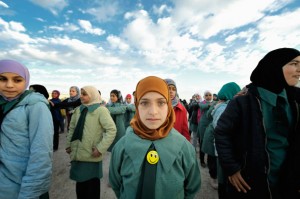 Girls line up before starting school in the Zaatari Refugee Camp, located near Mafraq, Jordan. Opened in July, 2012, the camp holds upwards of 50,000 refugees from the civil war inside Syria, but its numbers are growing.

“Thank God for our humanity.”

This quote is from Isam Alhuniti and is in reference to the Syrian refugee crisis. It is borne from his personal experience. You see, Isam lives in the Jordanian capital of Amman, where he owns an apartment building. Some of his tenants are Syrian refugees who are fleeing the violence in their home country. Though some families, like that of Souad Kasem Issa, her husband and their six children, have not been able to pay their rent in many months he is still helping supply them with food and blankets. He shared that this is because that at one time he had lived in the U.S. and was nearly bankrupted by his daughter’s medical bills. It was only through the help of some Catholics and social service groups that he was able to keep his family surviving.

Isam is not alone in both his personal story of struggle nor in his willingness to extend a helping hand and a warm heart to his neighbors. Dhamyah Mahdy Salih, a volunteer with International Orthodox Christian Charities, which has been working with Syrians both inside and outside Syria, has also connected Issa’s family with assistance. Salih is a refugee from Iraq, whose family has been in Jordan for nearly ten years. She said it was ordinary Jordanians who helped her family make it and now she wants to return the favor.

All of this is happening in the midst of one of the harshest winters in the region with blowing winds, dropping temperatures and heavy rain and snow. Many are suffering from these conditions, particularly the 612,000 Syrian refugees who are trying to find shelter and safety in neighboring countries like Jordan, Lebanon and Iraq. In places like the refugee camp of Za’atari, on the northern Jordanian border, the situation is quite bad, with children and older adults being most susceptible.

Prior to this current situation the ELCA, through generous gifts of people like you, has given $450,000 to address the needs of Syrians within and outside Syria. Through our membership in the Lutheran World Federation, this response been helping to meet the needs of refugees at Za’atari. In the past week the ELCA has committed another $100,000 to the work in the camp to help meet the needs of children, to help keep them “warm and dry”. Yet as the situation within Syria and the weather in the region worsen, the need continues to be great.

As we continue through this season of Epiphany, of Christ revealing, may we stay aware of the needs in God’s world. And in this moment may we particularly lift up or brothers and sisters in Syria and the entire region, that though violence may rage and temperatures may drop, we can still thank God for our humanity and the opportunities will all have to reach out with warm hearts to meet our neighbors in their need.

For more information on the situation please check out the following reports: