South Sudan: Reflection from the Field

Sarah Dreier is the Legislative Representative for International Policy, a position shared jointly between the ELCA Washington Office and the Episcopal Church Office of Government Relations. She reflects upon her recent trip to South Sudan and suggests how you can get involved.

“But what do you do to cope?” I asked my new friend, Anne, who coordinates Lutheran World Federation refugee programming in Kenya and lived in the Dadaab refugee camp for several years.

Anne looked up at me with a sparkle in her eye. 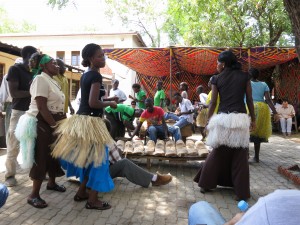 South Sudanese dancing and singing at an afternoon celebration in Juba, the capital of South Sudan. Credit: ELCA/Megan Bradfield

I saw this same resilience thriving across South Sudan, amidst the conflict, poverty, and desperate need for development – thriving over the daily trials. It was in the young woman, gracefully carrying gallons of water overhead as she strolled down Bor’s dusty, dirt road. I saw it in a local performance troupe, dancing and singing under Juba’s scorching afternoon sun. It was in Jonglei State’s tribal leaders as they returned once again to try to negotiate a peaceful resolution to their tribal conflicts that have taken so many lives this year. I felt from my fellow worshipers in the vibrant, packed Cathedral in Juba late Sunday morning and into Sunday afternoon. And I heard it in the powerful voice of South Sudan’s Minister of Labour as she commanded international aid agencies to hire more South Sudanese employees.

This is a resilience that the South Sudanese carry along with their looming memories of incomprehensible turmoil and their expectations for future uncertainty. I learned that one local development colleague who is working tirelessly to strengthen South Sudanese agricultural capacities while addressing the daily realities of malaria, poverty-based hunger, and conflict, had been kidnapped as a small boy to become a child soldier. Another young man had fled to a Ugandan refugee camp as a baby and returned to his country—on foot with his wife and two young children—only last year, when South Sudan became independent.

“How long did it take you to walk back?” I asked.

“Three or four days, only. But for you, it would take much longer,” he said with a grin. 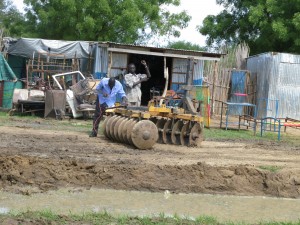 It is hard for me to comprehend the daily challenges and insecurities the South Sudanese face. The tribes in Jonglei State just last week arrived at a delicate peace agreement to end violence, cattle raiding, and child abductions amongst them and have begun an equally precarious disarmament process focused (in part) on retrieving weapons from youth. South Sudan’s escalating war with Sudan (driven in large part by oil) has absorbed precious state resources away from development, forcing South Sudanese to live with unpaved dirt roads, insufficient education, bare-minimum health care services, and little capacity to farm their nutrient-rich land. Meanwhile, South Sudanese and other Christians living in the north face increased persecution and those living in the border regions live under the constant threat of random attack or starvation. But through it all, the South Sudanese remain resilient, wise, and capable.

Yet U.S. policies and rhetoric do not reflect the South Sudanese’ promising capacity to thrive and flourish—by growing their own food, for example—which is tragically thwarted by a severe lack of resources.

Americans should shift our narrative—and the United States government its development policies—in South Sudan, away from assumptions of despair, to reflect this Sudanese capacity for resilience.

Tell your Representative to join the 14 Republicans and 62 Democrats who support HR 4169, the Sudan Peace, Security, and Accountability Act of 2012, and to support the bill’s underlying commitment to sustainable peace and development by supplementing U.S. food assistance with robust funding to U.S. programs that invest in agricultural development and small-scale farming in South Sudan and around the world.

—-
For more information check out the e-Advocacy Alert.