Franklin Ishida, Area Program Director for Asia/Pacific, ELCA Global Mission, was with the leadership of the Japan Evangelical Lutheran Church (JELC) in Malaysia during the March’s devastating earthquake.  Franklin arrived to Japan one week ago and has been accompanying the leadership of the JELC in their relief efforts.

The following post is from Franklin, and captures a quick glimpse of the efforts underway to restore lives and livelihoods in the wake of disaster.

Relief efforts, initiated within days after the earthquake and tsunami, have now been expanded with additional plans for entering a recovery stage. As in any disaster, on-the-ground assessment is important.  Earlier this week, a 6-person team from the JELC headed to the disaster area taking with them supplies including food, a motorcycle and a couple bicycles. These latter means of local transportation were important as gasoline is virtually impossible to obtain even three weeks after the disaster. The team visited several cities and towns, many devastated by the tsunami. They talked with local municipal officials and representative of non-profits still sifting through the massive destruction, determining needs, and addressing some of the most critical needs in their communities.

Trying to clean up from the destruction is still going slow as bodies are still thought to be in the rubble. But meeting the daily needs of those who survived, most of whom are in evacuation centers, is still critical.  Food and other daily items have been rushed in from all over Japan but are piling up due to challenges faced with the distribution network. While roads are being cleared, lack of gasoline prevents vehicles from hauling these much-needed items beyond central evacuation centers and storage depots. In some instances, people have been encouraged to come and get what they need; but they, too, don’t have the means to move around. 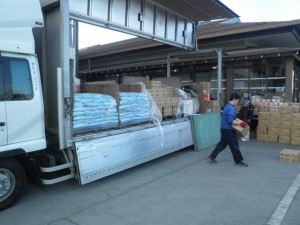 These gaps in the distribution of supplies are causing some hardships, in addition to unmet needs in some areas. Now constituted as Japan Lutheran Emergency Relief (JLER) — a cooperative effort of the Japan Evangelical Lutheran Church, Japan Lutheran Church, Kinki Evangelical Lutheran Church, and West Japan Evangelical Lutheran Church — the churches chartered three trucks to transport both purchased food items and in-kind donations from congregations around the country. These trucks departed from a warehouse in Tokyo on March 28 and headed to three different areas of the affected region. Coordinating with local municipalities and non-profit organizations, food items such as rice, miso soup, water, juice, and non-perishable food were dropped off at local distribution sites. To expedite and streamline the distribution network, JLER is now going to rent warehouse space in the disaster area, and will utilize a small truck and vans to reach communities with the greatest needs in coordination with other actors.

Meeting food, clothing, and other daily needs are just part of an initial response stage. As people start to rebuild their lives, even if by living in temporary housing, further emotional and livelihood questions will surface.  JLER is preparing to meet these needs as well. Counseling centers will be established, with both professional and trained volunteers prepared to engage people’s emotional trauma. The Japan Lutheran College in Tokyo has social welfare and counseling departments, and the college will take the lead in mobilizing necessary people and resources.

While the government will certainly provide much assistance to rebuild people’s livelihoods, there will certainly be gaps. JLER is preparing to provide grants to help selected individuals and families rebuild their lives. This will come after careful analysis of unmet needs as they emerge. Japan is a developed country, and much is happening quickly to address this catastrophic disaster. The scope of this disaster is presenting the greatest challenges. JLER, with assistance from all over the world, including the ELCA, is attempting to do its part in addressing the many emerging and changing needs, coordinating along the way with other actors to promote an effective response.