Our Journey to Children at the Border – Guest Post from Rev. Stephen Bouman

Below is a guest post from Rev. Stephen Bouman, Executive Director of ELCA Congregational and Synodical Mission 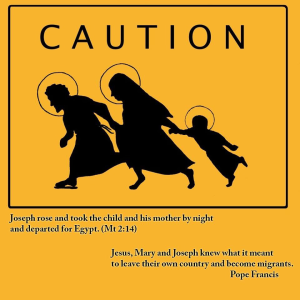 Every journey worth taking begins in the heart, then the feet begin to move down the road. I received an invitation from Mike Nevergall of Lutheran Social Services of the South (LSSS) to accompany them in their work of providing a welcome to some of the many “unaccompanied minors” (children of God) who are streaming across our borders in an ever-increasing flow.

For four years, the number of children migrating from Central America (mostly from Honduras, Guatemala and El Salvador) through Mexico to the U.S. has doubled every year. This year it is more than 57,000 and counting.

I asked my colleague, Rafael Malpica-Padilla, director of Global Mission, to join me in leading a visitation to the border. (Rafael shared the above graphic depiction of the migration of the Holy Family). This is a global\local issue demanding a broad conversation and understanding about the contexts in Central America, Mexico and the United States, and the conditions which “push” and “pull” this migration. Rafael agreed, and our delegation included staff from the global and domestic units of the ELCA, disaster response partners and staff from our Washington advocacy office. We were joined in Texas by leaders from LSSS, local pastors and leaders, and partners from Mexico.

Our visit began at Lutheran Social Services’ (LSS) Office of Refugee Resettlement (ORR) Transitional Foster Care program office in Corpus Christi. We had the chance to hear about the unaccompanied children who end up in transitional foster care. We toured the facility, including a classroom where children were doing their lessons for the day. LSS runs two of these facilities, serving 32 children at the Corpus Christi facility and 50 at their El Paso facility. These children in Transitional Foster Care group homes are under the age of 13.

We met a couple (names withheld for security purposes) who were the first foster parents who signed up when this new office opened in April. Since then, more than 80 children of God have been guests in this foster family’s home.

“The children are afraid when they come to us. But this is their promised land, given everything they have been through,” they said. “These children come with remarkable faith. We pray with them. Some of these children become ‘little evangelists’ because they are welcomed here and their faith is nurtured.”

There is a sign in Spanish in front of the couple’s home. In English it reads: “The last stop of a long journey.” 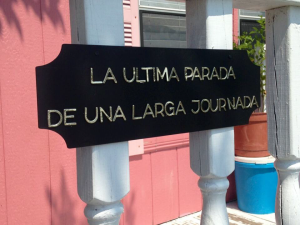 Upon entering a classroom, the issue became incarnate for me. Here were the children who had been on our hearts.

A five-year-old boy smiled at me. He is from El Salvador and crossed the border with his grandmother, from whom he was separated during intake by U.S. Border Patrol. There were two sisters from Honduras, seven and eight years old. We thought of our children and grandchildren, the ages of these children, as we moved among them speaking, listening, pondering. We are in an environment which is built to provide safety for these children. We took no pictures of the children. Pictures we do have are “stock” photos. Volunteers are not allowed contact. So our partners in LSS are our hands and hearts. In the faces of the foster family, and the faces of the children, we saw the face of Jesus.

We next visited the Bokenkamp Children’s Shelter in Corpus Christi where we had a rare opportunity to visit one-on-one with the children who are currently staying there. Paul Hernandez, executive director of Bokenkamp, and his staff graciously showed us around the facility and answered questions about how children end up there and where they go when they leave. Children in this facility are age 13-17.

More than 100 children were sitting around tables in a large room. I went from table to table. Between my bad Spanish and the limited English of one of the staff who accompanied me, we were able to listen to the stories of many children. My questions were basic: Where are you from? How long did it take you to get here? What was your journey like? How is it in this place? Where do you have family? The answers formed a very clear picture. The biggest reason they came here? “Violencia.” Violence. The first person I talked to, a girl of thirteen, was very clear: “The gang will kill me if I stay.”

I heard stories of extortion, family members being killed, threats. I also heard that children come to reunite with family. When I asked about what it is like in this place, many smiled and gave the same answer. “Seguridad.” Safe, secure.

Stories of their journey varied. They came by bus, by train, by van driven by “coyotes.” Some walked many miles. For some, the transit was relatively uneventful. Others were robbed, assaulted, witnessed bad things happening to others. Staff told us that many of the girls were prepared with birth control.

Many kids come prepared with documentation and papers to help them gain residence here. When I asked where family was living, the most frequent answers were: New York, Maryland, Los Angeles, Boston.

There was one moment when The Bronx met Texas and Honduras. At Transfiguration Lutheran Church in the Bronx, the congregation had an occasional liturgy in the Garifuna language. The Garifuna are Afro-Caribe people who live along the coast of Honduras and Belize. As I was conversing with a beautiful, dark skinned girl with thick, corn-row braided hair, I asked, “Garifuna?” She lit up in a huge smile and shrieked out, “Si!” Yes! She was delighted to be noticed, recognized, to show up in all her particularity.

The next day we drove to the McAllen area at the border. This is the epicenter of the lower Rio Grande valley migration destination. We visited St. John Lutheran Church in San Juan, and we met Pastor Sylvia De La Garza. Pastor Sylvia introduced us to Danny Martinez, an agent for the U.S. Border Patrol, who gave us a presentation about their work.

Danny Martinez grew up in San Juan and had been a teacher. He told us that in Tucson, 80 percent of the migrants picked up by Border Patrol are Mexicans. In the Rio Grande Valley, the number is 80 percent “OTMs.” (Other than Mexicans).

Because of the 2008 anti-trafficking law, Border Patrol cannot send the children back without papers, opening a case, a judgment. He said that a majority of the “coyotes” who expedite the actual transport are also juveniles. He said the train through Mexico between Central America and Texas is really bad. Children ride on the roof, where some are robbed, assaulted, raped, even thrown off and killed. The train derailed eight times this past year. It is known as “la bestia” – the beast.

We also had the privilege of meeting with Jennifer Harbury, an attorney and human rights activist who is active in the Rio Grande Valley, specifically in cases involving Central Americans. She wrote the book Truth, Torture and the American Way to describe her efforts to find out what happened to her husband Everado during the Guatamalan civil war.

Jennifer told the story of a boy she took in, making the various issues around migrating children personal and vivid. In Honduras, gangs came to recruit the boy when he was about thirteen. They beat him, but he refused to join. The second time they ran him over with a car. His mom gave him $30 and told him to run. The Honduran army beat and robbed him at the border. He rode on the roof of the train. A gang got him in northern Mexico. He was nabbed with a bunch of children in order to extort from their families. The children broke away at the first opportunity and ran in every direction. He almost drowned swimming across the river and got picked up by Border Patrol. He was abused in an ORR facility and in foster care for a month when she met him. Since then, he has beaten alcohol, has a job, and is taking care of his nieces and nephews. Jennifer talked about what drives children to hit the road. As she said, “It’s raining battered children in my back yard!”

We then visited Calvary Baptist Church and met with Pastor Chad Mason and Kathy Herzberg on the missions staff. Chad told us about the ways that volunteers are being used, what donations are needed, and how things are being coordinated to help refugees after they are dropped off at the McAllen bus depot. Volunteers meet families at the bus station, help them buy their tickets (with vouchers paid for by their families), and take them to the relief center at Sacred Heart Catholic Parish, two blocks from the station. The center is an ecumenical ministry run by Catholic Charities where volunteers help with a variety of services. The center sees 140 people per day. The refugees receive two fresh sets of clothes, they have the opportunity to eat, shower, and relax, and their children receive play therapy through Save the Children. Sister Leticia Benavides gave us a tour of the facility. We were there as a group of mothers and children arrived. Everyone in the large, cavernous facility stopped doing what they were doing and began to applaud. “Bienvenidos!” Welcome! People arrive after having been detained 3 – 10 days. They are dehydrated, tired, and tears well up at the first genuine act of hospitality they receive after the long journey.

The next day we met at Our Savior Lutheran Church in McAllen. We heard from Omar Mixco about the renewed work of La Frontera Ministries International and his goal of expanding their educational and immersion opportunities. Omar is from Honduras and is currently based in Mexico City as the part time executive director of La Frontera, and he is looking to engage with a variety of partners on each side of the border. He told us that the city of San Pedro Sula in Honduras is the most violent city in the world. He is working closely with Our Savior Lutheran Church, and Mary Lovig from Our Savior shared with us about the ability of groups to stay at the church for immersion experiences and mission trips.

We heard from Pastor Paul Bailie from Iglesia Luterana San Lucas in Eagle Pass, Texas, and we learned about how the situation in Eagle Pass is similar and different to what we had experienced in McAllen. About a five-hour drive separates the two areas. Paul is making weekly trips to Mexico when he preaches at their sister church, Cristo Rey in Piedras Negras. Paul described a situation of unrelenting poverty. In his church, those with and without legal documents worship together. Paul has a strong vision for the ministry, and an investment in its home grown leadership and sustainable future.

I would close by remembering the baby Moses, hidden in the bulrushes in the water in order to save his life. And by remembering the great conspiracy of the women, both Hebrew and Egyptian – slave and free – to save, nurture, and love the child. God grant such a conspiracy among us in our time.

If you would like to support Lutheran Disaster Response’s work with Unaccompanied and Migrant Children, please visit the response giving page.