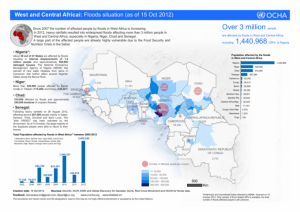 Africa’s most heavily populated country has been spent much of 2012 responding to disasters. Earlier this year the country was affected by drought which spread throughout much of West Africa. Heavy rains in August/September have led to flooding throughout the country, with 24 of the 32 states severely affected and over 7 million people affected. In the midst of these natural disasters, the year has seen increased fighting between the militant group Boko Haram and the Nigerian militaryy. This has led to fear among many, particularly Christians in the northern part of the country who have been targeted by the group.

The ELCA has been in communications with our companions in the region, the Lutheran Church of Christ in Nigeria, as to the best ways to respond. Please keep the people of Nigeria and our brothers and sisters of the Lutheran church there in prayer that Christ may bring them peace and security in the midst of destruction and fear.

To lean more about the affects of flooding on Nigeria and region you can check out these resources: