Lutheran Disaster Response’s activity space was titled “Hope for the Refugee,” and the interactive activity gave participants a chance to have a simulation experience of the journey that refugees face. Participants were grouped into “family” units and assigned family roles that they portrayed throughout the activity. Stations included discussing and determining what materials families might need with them to make the journey to a refugee camp, learning about challenges encountered along the journey and how to adapt, and learning about the hope found at refugee camps and what Lutheran Disaster Response does to support refugees around the world. 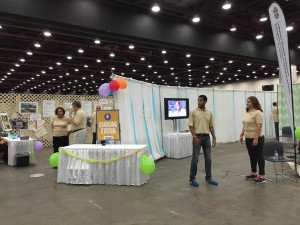 Approximately 1,200 youth participants and adult leaders visited the “Hope for the Refugee” activity space and learned more about the work of Lutheran Disaster Response. 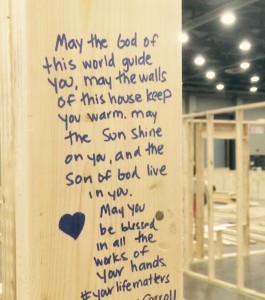 A message written by a 2015 ELCA Youth Gathering Participant on a house frame built for a Habitat for Humanity home in Detroit.

More photos of participants at the “Hope for the Refugee” activity space and of the dedication of the house frames can be found on the Lutheran Disaster Response Facebook page.

We were blessed to have the opportunity to be a part of the 2015 ELCA Youth Gathering and to meet and interact with so many wonderful youth from around the country!