The following is a great update from the ACT Alliance of ongoing responses in Kenya to the drought which has been affecting the area since early last summer. Read how a feeding program has improved the lives of students and is in the transition to a sustainable community gardening project. Also, see how a traditional pastoralist is learning to become a farmer and read of education is the hope for the future. 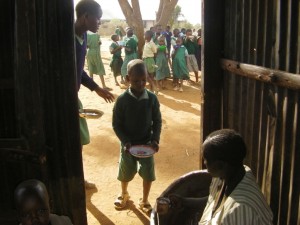 Welcome to Emukutan primary school, which besides molding and educating future leaders also provides the one and only meal to 160 children living in a drought affected area of Kajiado County.

Started in 2006 as a community school, it is located close to the main road, making it accessible and the best alternative for many people. Previously they were forced to walk several kilometers in order to attend public schools supported by the government of Kenya.

The dry-spell and lack of rains in 2009, which led to severe drought and loss of animals, has affected the school’s attendance. This trend changed in Sept 2011 following food distribution of maize, beans, cooking oil and ujimix by ACT Alliance member, Anglican Church of Kenya (ACK) – Kajiado Diocese.

“We had enrolled 114 pupils and within a week of the feeding program [the] number got to 115 before eventually settling at 160 [in January 2012],” shared the school’s head teacher Joyce Ntiati. “Pupils health has improved and many children are now concentrating during the afternoon classes,” she added.

According to Ms. Ntiati, the school requires 16kgs of maize, 5kgs of beans, 5 packets of ujimix and half a liter of cooking oil everyday to feed the 160 pupils. “We know we are underfeeding the children, but it is better than starving [them],” said Ntiati.
The school has only one government sponsored teacher. The funds for the seven other teachers and other needs, such as books and school uniforms, come from parents’ contributions.

It is feared that the number of children attending the school may drop significantly if the feeding program is terminated. “We [have] distributed food to the school since September 2011 [but] have run out of resources to sustain the feeding program,” said Rose Muthama, ACK Emergency and Disaster Management Program officer. The school, constructed with support from the Constituency Development Fund (CDF) and AMREF, faces enormous challenge to sustain the children in school.

“Some [pupils] stay far from school, their parent’s livelihood was affected by drought and do not cook at home. We want to plant assorted crops that will feed all the children,” said Joshua Kasaile, chairperson of the school community.

Children in class four for instance, reported an increased mean score from 177 prior to the feeding program to 258 mean score within months of the same academic calendar. These gains may wither if the decision to stop the program becomes a reality.

ACK intends to put into good use the available piped water in the school by constructing a green house which will guarantee food to children many under 10 years.

Shift from pastoralism to agriculture
Solomon Olbanda, a 30 year old father of 6 children, lives in Ichalai village Mbirikani division of Kajiado County. During the drought that lasted for more than six months his only economic source of livelihood was disrupted. He owned 150 herds of cattle but the severe drought claimed 130 of his livestock and left him with 20. Hard economic times coupled with pressure to sustain his family forced Solomon to sell off some of the valued animals among the Maasai community. Today he has four cows, which he grazes on his farm. Past emergencies, particularly drought, have been cyclic in the area leading to deaths and starving livestock. Solomon, like many in his community, is embracing agriculture as an alterative means of survival.

Through the support of the Anglican church of Kenya, a member of ACT Alliance, maize seeds were distributed to vulnerable families such as that of Solomon. The goal was to help communities embrace alternative livelihoods from the historic pastoralist one, which is preferred by many in the Maasai community.

Solomon’s determination and hard work bore good harvest, although he is faced with numerous hurdles since agriculture is a new path in his life. “I have 3 hectares of maize plantation and sell the produce at Kimana market,” he says. He earns 1,500 shillings per bag of 90kgs and uses the proceeds to pay school fees for his children.

Solomon uses the profits made from agriculture to re-stock and improve quality of life for his family. For many vulnerable families in Kajiado County, this may be the desired path to transform from dependency on humanitarian aid and relief food to a sustainable livelihood.

Hungry but willing to share
For Esther Kibungi, a mother of eight children, the recent drought is only comparable to the one experienced in 1975. “We received food relief from the government after we cut down all the trees,” lamented Esther. She wishes back times – “It used to rain normally; we had milk and cows were in plenty and [we] didn’t need food assistance.”

“Clearly knowing others missed [relief food] and ignoring them is a curse for me. So I shared what I received,” said Esther. This was the same story among all beneficiaries. Food rations meant to feed the beneficiaries for 2 months ended up feeding the majority for a week. “I shared with 10 people and now have no food; I depend on borrowing,” lamented Esther.

The drought is blamed on human activities, such as sand harvesting, deforestation and other degradations of the environment around Ngatu. The paradox here is that the livelihoods of communities faced with the impact of the recent drought depend solely on lorries which ferry sand in order to place food on their table. “Our children are hired both in the day and at night by sand harvesters to load sand for 200 shillings,” regretted Esther.

“We can’t sit down and wait for our children to provide food for us, we work in tomatoes farms. Life now is [about] waking-up early to harvest tomatoes,” said Christine Loibangote.

Women in pastoralist community are seeking alternative means to feed their families in a patriarchic society which looks upon the woman as responsible for feeding her family.

“Community members without livestock were assisted by those who had plenty. That no longer happens; life is difficult,” said Maria Kaite, a mother of 5 children.

For now education is the only hope.
Damaris Susaika, a mother of 5, is however optimistic that despite the difficulties brought about by cyclic drought there is hope. “My first [three] children didn’t attend school, but the other two are in school. We need vision to educate our children because their knowledge will re-shape our future lives,” said Damaris.

She lamented that women have no knowledge of what happens outside their manyattas (settlements) and wishes they were educated on how to do things differently.

ACT Alliance members and partners in Kenya recently conducted a joint monitoring exercise to establish the impact of both food and non food relief distributed in response to the worst drought that affected East and Horn of Africa.