Japan: Reactions and Responses Around the Region 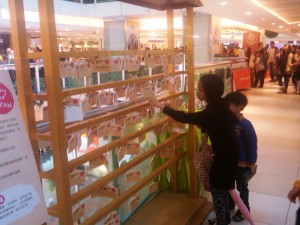 As news and rumors about the situation in Japan after the earthquake, tsunami and continued potential for nuclear crisis there have been mixed reactions and responses from Japan’s neighbors in the region. The following reports from the Rev. Franklin Ishida show the breadth of these two.
———–
Prayers in Hong Kong

During my visit to Hong Kong, I encountered two instances of public display of prayers for Japan.

The Evangelical Lutheran Church of Hong Kong has a newly established school, Lutheran Academy. A special assembly was called on March 17, where students and teachers stood for a moment of prayer. One of this schools expressed values is a global perspective. The students I talked to, without prompting, spoke with eagerness that they had engaged in this prayer for those who lost lives and for survivors of the earthquake and tsunami.

Meanwhile, at a shopping mall in Shatin, a place to hang “ema” (see photo – prayers or wishes written on a small wooden plaque, often seen in Japanese shrines and temples) was located in a prominent place. Children and adults were adding their prayers for the Japanese people, expressed in this Japanese form of prayer.

In many parts of China, there has been panic buying of salt. This is with the rumored [and mistaken] understanding that iodized salt can help ward off radiation poisoning. This is in reaction to the radioactive plume coming from the tsunami-damaged nuclear reactor in Japan. Store shelves of salt supplies have been emptied in Beijing, Shanghai and other cities.

In southern China, this buying fenzy has spilled over into Hong Kong, causing hysteria and even violent struggles over supplies. In Hong Kong, at least, wild purchasing has stabilized. But newspaper reports point to a lack of trust in the government by Chinese people and a succumbing to a “herd mentality” in such crises.

In a similar way, infant formula, which was widely tainted in China in 2008, is still feared in that country. Even after the problem was resolved, people have tended to purchase Japanese-made formula. Now, with fears of radiation, people are scrambling to secure formula that was produced before the tsunami. Again, many southern Chinese are flooding into Hong Kong to buy up these pre-disaster Japanese formula stock. Stores are keeping formula behind the counter so as to avoid fights over remaining items.