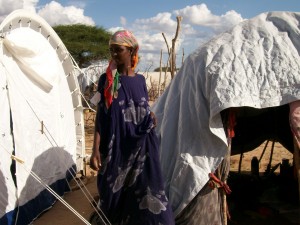 Luley standing between her tukul and tent that now serves as her home. Credit: Faith Kagwiria

Reduced rains have led to drought throughout the Horn of Africa leading a severe water shortage and higher food prices as crops and animals pass away and are eaten for survival. Many have had to leave their homes in search of food and water. Below is the story of Luley Hassan Aden as shared by Faith Kagwiria, who works at the refugee camp in Dadaab.

Luley Hassan Aden is a young woman of 19 years, living on the outskirts of section L10, Hagadera Refugee Camp in Dadaab, North Eastern Kenya. This is where many newly arrived people from Somalia, like herself, are settling. This afternoon she is resting and cooking in a space between her Tukul (a small Somali type of “lounge”) and her “house”, which is a tent she received from the LWF three days ago.

Luley married when she had just turned 17 and is now the mother of two children. After living peacefully with her husband in Sakow division, Bu’alle district in the middle Juba region of Somalia, she decided to start the longest journey of her life, fleeing from the insecurity that had become unbearable.

“I needed to look for peace for my children and myself, not caring to know where I was going,” he says poignantly. Her husband was forced to flee from their home due to fears of being killed by the militia, after he refused to enlist himself as a fighter. “I don’t know if my husband is alive or dead, and when my children ask when their dad is coming, I always lie to them that he went for a long journey and has delayed there because of lack of money,” she narrates as her watery-eyes stare with desperation.

At home in Somalia they kept cattle and she started her journey to Kenya bringing the family livestock with her. But all the cattle died before she found her way to the refugee camp. On their way from Sokow, between Dhooble and Loboi, they encountered bandits who robbed all the people in her ‘convoy’ and left them with no valuables.

Luleys says that she is slowly beginning to accept her situation, and is trying to adapt to her new status in Hagadera camp, as a refugee assisted by relatives and agencies. Her greatest challenge is how to bring up her two children in the camps, without her husband.

When she arrived in Hagadera, relatives in the camp first hosted her in a small dilapidated Tukul. She stayed in this structure for four days weathering the biting cold of the night that did not have mercy for her children. “I had never stayed in a Tukul as my house, and my children developed a cold. Life was so miserable and I felt I had lost it all” says Luley.

She was visited by the block leader who took her details and gave her the ration card number for food distribution. The same afternoon she was visited by a team of staff in the camp. “We found her in an unbearable state and based on the criteria we use, she was given priority. We have done follow-up visit and provided her with a tent to sleep in” explains Keinan, a LWF social worker based in Hagadera.