My name is Mike Nevergall, and I serve as Associate Program Director of Lutheran Disaster Response.  My colleague, Kevin Massey, and I are in North Dakota and Minnesota this week for what has become an all too regular event – the annual cresting of the Red River of the North.  I wanted to share with you some of what we have seen and heard this week and ask you to continue praying for the people here. 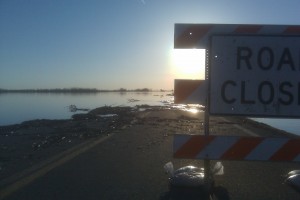 A washed out road, just west of Harwood, N.D.

Similar to large hurricanes, which are given names, each flood is different, as if it has its own personality.  The story of this flood is overland flooding – farm fields and rural roads, small towns and isolated areas.  The crest in the Fargo/Moorhead area, which happened over this past weekend, came in at 38.75 feet, about two feet shy of the record from 2009.  The overland flooding, however, appears to be the worst in recent history.

On Monday evening, we had the chance to ride along with Pastor Jeff Sandgren, of Olivet Lutheran Church in Fargo, as he drove to Harwood to deliver hot meals to the National Guard troops stationed there.  Near Harwood, a small town about eight miles north of Fargo, the water from the Red River, and from the nearby Sheyenne River, is nearly four miles out of its banks, and about 20 miles of the interstate have been closed all week.

Outside of Harwood, I met a farmer as he left to walk his dog.  His home was completely surrounded by water, with some of his outbuildings already under, and the road was completely washed out less than 100 yards from his driveway.  He described to me that the hardest part of the flood fight is the exhaustion from lack of sleep.  “The sump pump kicks on every three minutes,” he told me, “and you don’t dare fall asleep at night for fear that you won’t hear if it stops working.”  You can imagine how that exhaustion compounds – this is the third major flood here in as many years, and this year’s flood fight started on Valentine’s Day. 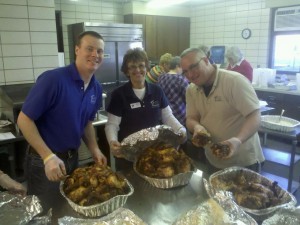 I am so proud of the Lutheran churches and people we have met here in the valley.  As I already mentioned, the people of Olivet Lutheran have been serving hot meals to first responders – police, fire, highway patrol, National Guard – as they work tirelessly to keep people safe.  The people of First Lutheran, also in Fargo, have partnered again with the Salvation Army to make sandwiches by the thousands to deliver.  Bonnie Turner, with Lutheran Social Services of North Dakota, is playing a key leadership role with community groups in coordinating the response on both sides of the Red River.

Even as new disasters happen, we recognize that disasters take months or years, and not weeks, to clean up and be recovered.  Yesterday, we visited with Pastor Del Moen and the members of the Wadena Otter Tail Long-Term Recovery group.  Last June, a tornado tore through Wadena and the surrounding communities, leaving more than 100 damaged homes in its path.  Pastor Moen has been a key leader in the ongoing recovery process, and I am truly proud of his service. 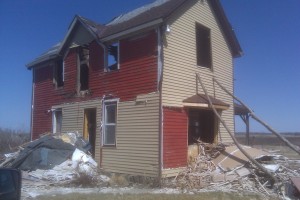 A home outside of Wadena, MN, which was destroyed by last summer's F4 tornado.

So what can you do today to help?  First, I cannot say enough about the power of prayer and what it means to these courageous survivors. Please pray for the people here, for their patience and strength, for their emotional and spiritual health.  Second, the national media has given very little attention to this flood, especially after the larger towns appeared to be safe.  Help us tell this story. Whether by e-mail or on Facebook, send this along to a friend, tell them about what is happening here and encourage them to pray as well.  Finally, I ask you to consider making a gift to the U.S. Floods fund, and we will make sure that it gets to those who need it most.

Thank you for your ongoing support of this important ministry of our church!