My name is Kevin Massey, I am the Program Director of Lutheran Disaster Response, and I am sharing with you a report of my journeys this week in New Jersey and New York.  Even as I share this report I also share that I struggled with how to describe the two very important yet very different parts of my journeys.  I considered sharing them separately but decided to describe this journey together.

I had been scheduled for some time to participate in a ceremony commemorating the 10th anniversary of the September 11th attacks in New York.  Long before I worked for Lutheran Disaster Response, I had been part of the recovery operation at Ground Zero.  I was a member of a special Red Cross team of trauma experienced chaplains who coordinated spiritual care in mass casualty events.  As a member of this team, I worked at Ground Zero for three weeks, providing chaplain services for fire fighters, police officers, medical examiners, and others involved in the recovery operations.  It was heart breaking work, and it took a terrible toll on all of us who worked in those difficult days.  I can never visit New York without being brought back to those times.

A few weeks ago, Hurricane Irene ravaged a huge swath of the United States from Puerto Rico to the border with Canada.  The storm’s winds damaged parts of North Carolina and Virginia, but some of the most devastating effects of the Hurricane were the flooding that it caused in parts of New England, New Jersey, and Upstate New York.  Even in recent days, remnants of another storm, Tropical Storm Lee, have brought new torrential rains that reflooded many of these same areas, and other areas including  in Pennsylvania. 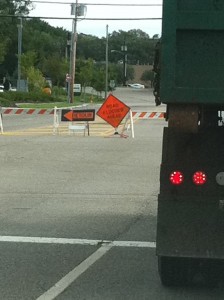 Roads have been closed throughout numerous states from flooding in recent weeks.

As the extent of this flooding became clearer, I rearranged my schedule to come to visit part of the areas of New Jersey flooded by Hurricane Irene before continuing the visit to New York for the September 11th commemoration.  As I traveled to New Jersey last week, I met Lisa Barnes, the LDR Coordinator for New Jersey who works for Lutheran Social Ministries of New Jersey.  This agency is a terrific organization that provides a wide variety of crucial social ministries in addition to disaster response.  We did planning about the ways that we could best respond to the flooding but wanted to see the worst areas first hand and hear from local Lutherans what their ideas were for the response.

We traveled to Rockaway, New Jersey and met with Pastor John Hansen of Holy Trinity Lutheran Church.  Pastor Hansen and other Lutheran pastors from that area are ministering to communities along the Rockaway River that have all been affected by flooding.  The congregations are providing food and support to their communities during this emergency phase of the disaster.

I met Roy Provost at his home in Denville New Jersey. Roy is the council president of Holy Trinity Lutheran Church in Rockaway New Jersey where Pastor John Hansen serves. Roy’s home was significantly damaged by the flooding caused by Hurricane Irene. Roy’s wife is a talented artist, and her workshop in the lower level of their home was destroyed by the flooding that ensued by the hurricane.  I was deeply touched however that in the midst of his loss, Roy was very concerned about his neighbors. Roy shared, “The worst part is not knowing where your neighbors are.  This neighbor is in her 70’s, and I don’t know where she is right now.” Roy shared ideas about how we in the Lutheran community could care for those who perhaps can’t care for themselves.  One idea that we surfaced was for designing a Hurricane Response Center in New Jersey where we could teach people who are able to attend to their own homes how to repair them safely and efficiently, and also coordinate volunteers who could help people like Roy’s neighbors who are not able to work themselves. 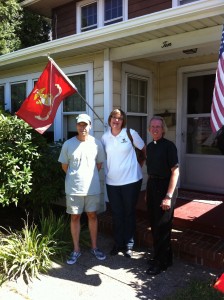 We will work to implement ideas like the Hurricane Response Center in areas affected by these recent storms, and at the end of this report I will share info about how you can help.  As I concluded the visit for assessing this Hurricane damage, I continued on to New York City for the gathering tonight by the Lutheran Community commemorating the September 11th attacks.

We gathered then this evening at another Holy Trinity Lutheran Church, this one in Manhattan.  Ten years ago, Lutherans had gathered at this congregation to support each other and grieve the terrible losses and fears of that day.  This evening we gathered there to commemorate ten years passing.  The lost are remembered.  The tears often flow anew.  While time assuages some of the sting of the pain, the ache remains.  We will always miss those whose absence leaves a space in our souls.

I felt great warmth tonight especially in seeing the relationships of collaboration and shared service that the Evangelical Lutheran Church in American and the Lutheran Church Missouri Synod displayed while responding to September 11th.  The service tonight included speakers and participants from both the ELCA and the LCMS.  ELCA Presiding Bishop Mark Hanson and also President David Benke, the President of the LCMS Atlantic District, both spoke. 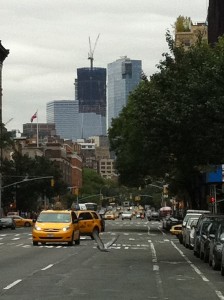 Work on the new World Trade Center Tower 1 is progressing.

I want our commitment to accompanying those affected by the September 11th attacks to be a signal to those affected by more recent disasters that we will accompany you as well, for as long as recovery takes.  People in Minot North Dakota, and Delville New Jersey, and Joplin Missouri want to believe that they will not be forgotten.  By our standing with the people of New York and Washington DC, and Shanksville Pennsylvania this weekend, we hope that this accompaniment demonstrates this commitment.

Please pray for the people of New York and other places and people affected by September 11th as they commemorate the passing of 10 years since the horrible attacks.  Please pray also for the many people affected this year by tornadoes and flooding and wildfires and drought in places like Minot North Dakota, Joplin Missouri, New Jersey, Pennsylvania, New England, and Texas.

Volunteers are urgently need right now in Minot North Dakota.  Volunteer opportunities in other areas affected by disaster are being considered and planned, but we are able to host volunteer teams in Minot right now.  Consider traveling there this fall to help with the clean up, and consider returning to Minot next spring to help with the rebuilding.  Please  click here  for information about volunteering in Minot North Dakota

Funds are also urgently needed to respond to the recent Hurricane and Tropical Storm damage along the East Coast, even as we watch anxiously that other storms can still form and affect the East Coast and the Gulf Coast. Please  click here to give a gift designated to help with these emergencies.