More than a century ago, Crisfield, Maryland, was the “Seafood Capital of the World.” Although its commercial fortune has declined through the decades, it is still a very beautiful small seaside city along the eastern shore of Maryland. On October 29, Crisfield and the surrounding county of Somerset were hard hit by Super Storm Sandy.. Hundreds of homes were damaged and destroyed. Yet, unlike their neighbors in New York and New Jersey, they have been largely overlooked by the media.

In mid-December 2012 I had the opportunity to visit Crisfield, hosted by Pastors Cindy Camp, Phil Huber and Thom Sinnott, our LDR affiliate in the area. On this trip I was able to listen to and learn from local residents and leaders about how they have responded to Sandy.

As is the case with disasters, some of the problems after the event are not really new but are heightened issues which existed prior to the disaster. A couple of these I learned about in Crisfield, were in regard to its demographics as one of the poorest and most ethnically segregated areas on the eastern shore of Maryland. Nearly 20% of residents live below the poverty line (as compared to 9% statewide) and over 42% are African American. This has led to a significant amount of ethnic tension which runs the risk of creating more roadblocks on their road to recovery; Some of the ways this potentially plays out in communities are that the most vulnerable often do not have access to adequate information on how to seek help. And the segregation between groups often prevents the formation of effective Long-Term Recovery Groups, which are the backbone to disaster recovery in communities. 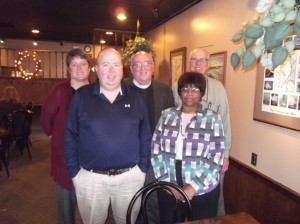 Yet, as is also the case in disasters, there resides the opportunity for the Spirit to break through and new opportunities and ways of being to emerge. One such occasion in Crisfield is work of our affiliates Diakon Lutheran Social Ministries and Lutheran Partners in Disaster Response (LPDR). These organizations, were active in this area soon after the storm connecting with the community. Spearheaded by Pastors Phil Huber and Thomas Sinnott, they have also worked diligently to reach out to the different ethnic, religious and civic groups within the community, with the goal of facilitating the formation of a Long-Term Recover Group.

This hard work has begun to pay dividends when in December the Somerset County Long Term Recovery Committee was formed with a membership that truly represents the diversities of the community. This group will work in collaboration to other civic groups, government agencies and churches to provide case management, volunteer support and other vital function to assist families and individuals affected by Sandy on their road to recovery. Our hope and prayer is that this committee will not only be an effective community based organization helping affected residents and family to find their “new normal,” but will also be a forum for community members to have meaningful discussions about their common challenges and shared future.