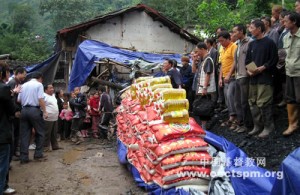 On September 7 a 5.7-magnitude earthquake shook southwest China affecting people mainly in the Yunnan and Guizhou provinces. The quake was followed by numerous aftershocks, which mixed with heavy rains led to mudslides and landslides along the mountain slopes. 81 people have been reported dead with nearly 750,000 people affected. Within the Christian community 29 churches were damaged, three of which completely collapsed.

The ELCA’s companion, China Christian Council, has been responding in the area. Immediately after the quakes they were in communication with the churches on the ground, collecting reports of damage and potential need, as well as passing on prayers of sympathy and solidarity. The response has involved visits to affected households, particularly those who lost loved ones, and emergency food aid of rice, oil and water to 465 households (2,323 individuals). The ELCA has committed $25,000 to help with this response.

As the response continues, please keep the people of the Yunnan and Guizhou provinces in prayer. May God grant them peace of mind and the resources they need to engage in their recovery. Also, pray that those who respond within affected communities may have wisdom, patience and strength in the midst.