El Salvador: “Without Retaining Dikes, There is No Food”

The title of this post comes from an advocacy piece written by ELCA Missionary Stephen Deal entitled “Sin borda…no hay comida”. The phrase has become the rallying cry of communities who live along a 10 kilometer stretch of the Paz River in the southwest corner of El Salvador. These communities, including many Lutherans, have been affected by annual flooding, like that of last October where 10 days of torential rains led to heavy throughout Central America and especially along the Paz River.

Much of this flooding occurs due to the lack of a system of retaining dikes at key points along the Paz River – which serves as the border between El Salvador and Guatemala. The consequences are predictable and often tragic: destruction of crops, homes, roads, bridges, farm animals and even the loss of human life. To help lift up this issue the communties formed the Inter-Community Association for the Development of Southern Ahuachapan (ADICO) which has been adovacting Salvadorian authorities for these dikes since the massive flooding of Hurricane Mitch in 1998. Yet for the most part these pleas have fallen on deaf ears and efforts have fallen off.

After last years major flooding event the communities decided to redouble efforts with ADICO and have been blessed with positive results. The authorities were beginning to listen and actions were starting to take shape, like a dredging project to help mitigate some flooding. A great victory and step forward this action offers a short-term fix to a longer-term problem.

“We are tired of being treated as victims; tired of being the recipients of charity . . . we want to be listened to.” – Inter-Community Association for the Development of Southern Ahuachapan (ADICO) representative in El Salvador

The communities are continuing to advocate for a dike system or another alternative to bring a permanent, sustainable solution to the problem of flooding. The ELCA is helping in this important work of disaster risk reduction and preparedness, through generous gifts to our Disaster Response fund and continued relationships of support with our local companions as they work to fulfill the quote above, to move from victims and recipients to empowered citizens engaged in their own solutions.

I think Stephen sums it up best in the closing words of his article: “Thanks be to God for the dedication of ADICO and Lutheran church leaders as they work to bring a measure of peace and stability to the lives and livelihoods of everyone living in this part of El Salvador. Thanks be to God also for the opportunities we have to accompany them through our prayers, visits & offerings!”

Central America Floods: It’s Not the Rain, But the Type of Rain

The following report from the LWF (Lutheran World Federation) gives an update of the situation following the deluge that has been hitting Centeral America since early this month. The issue is not just that it has been raining consistently but that the rains have been extremely intense. This has caused massive flooding and mudslides throughout the region that have led hundreds of thousands to be displaced and over 100 fatalities.

Please remember the people of the region in their time of need. 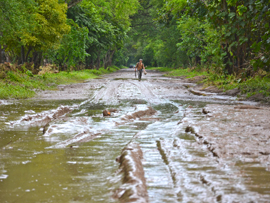 A road outside of San Salvador isturned to mud by torrential rains and has become impassible. Credit: ACT/Thomas Ekelund

Due to heavy rains over the past week countries from southern Mexico to Costa Rica have been flooded. The hardest hit countries have been Guatemala, El Salvador, Honduras and Nicaragua. Of greatest concern at this point are safety and access. With so much rain many have had to leave there homes, upwards of 700,000, yet with flooded roads being impassible there is little access to movement. This has made getting aid to people a major concern. And throughout the region there are many areas prone to mudslides, which have already led to over 90 deaths. Another concern is that crops that are just getting ready to be harvested will be lost in the flooding. This will lead to a double tragedy with an immediate food shortage and a lack of seed for next year’s crop.

The ELCA, through its Internatial Disaster Program, is staying in contact with our companion churches in the region and the Lutheran World Federation to assess the situation and possible responses. The ELCA already has funds positioned in Guatemala(~$20,000) and has released funds for Nicaragua ($3,153) that will be used to help meet the immediate needs of the region. As the situation develops we will be posting information on the ELCA Disaster webpage and here on the blog.

For an initial report from the region, see the ACT article by Thomas Ekelund Central America: death toll from torrential rains rises.