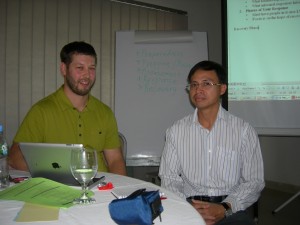 Over the last three days I attended an LWF workshop in Dhaka, Bangladesh. The purpose was to bring communications personnel from agencies, like the ELCA, and country programs, like Life With Dignity (LWD) in Cambodia, to talk about how to better share our story of the church active in the world, particularly around disasters. In the spirit of the workshops purpose I asked Dr. Sam Inn, Executive Director of LWD, if he would give me his thoughts on the situation of flooding in Cambodia. Below is a summary of the main points of that conversation.

To get some background on the situation and the initial ELCA response, see the previous post SE Asia Floods: ELCA Responds in Cambodia & Thailand.

Overview
According to Dr. Inn, the flooding has affected the areas mainly along the Mekong River and around Tonle Sap Lake, though 17 of the 24 provinces have been affected in one way or another. Luckily the capital, Phnom Penh, has not been affected. The situation has led to 250 deaths and 1.2 million people strongly affected.

Short Term Response
The main issue he raised in the short term has been the displacement of people by flooding. To address this LWD has been working with to provide emergency food kits in two provinces of rice, cooking oil, ionic salt, a water purifier and mosquito nets.

Long Term Response
Currently LWD is helping to conduct a post-flood assessment over the next 4-6 months to determine the long term needs of the people in affected areas. Dr. Inn shared that the most likely needs will be around people’s livelihood, mainly in agriculture. Since the rice crops have been affected, the response will probably focus on supplying rice seed. They also may distribute vegetable seed for home gardens and poultry for livelihood improvement. Overall Dr. Inn believes they have gotten past the worst of the disaster in Cambodia and LWD will now be focusing their energies on helping the affected people return to and rebuild their lives.

Update on Thailand
As to the situation in Thailand, their Disaster Prevention and Mitigation Department has reported 689 deaths and over 4.4 million people affected as of today. They also are reporting that heavy rains in the southern part of the country may lead to further flooding over the weekend. Dr. Inn also shared that with the flooding of Bangkok, much of the media attention has been focused on the urban areas and not on those affected in the rural parts of the country. 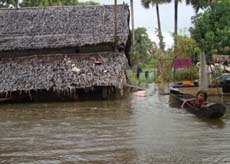 Since July, heavy rains and four tropical storms have hammered Southeast Asia, affecting the entire region with flooding and landslides. In the two hardest hit countries, Cambodia and Thailand, it is estimated that one-third of each country is underwater. Recent reports put the number of dead at over 1,000, with over 75% of those lost coming from Thailand (533 deaths) and Cambodia (250 deaths). With the rains continuing to come the crisis grows as more areas become inaccessible while simultaneously increasing the number of those in need. An example is the city of Bangkok, with a population of 12 million, being threatened with complete submersion.

On November 2, the ELCA commited $150,000 to the relief efforts being coordinated by Church World Services (CWS) in Thailand ($50,000) and Cambodia ($100,000). In Thailand they are working with our companion, the Church of Christ in Thailand (CCT) and in Cambodia they are working with our partner, Life with Dignity (LWD). These efforts will address immediate needs such as supplying emergency food, water and hygeine kits. It will also involve the rebuilding of destroyed homes and the restoring of lost livelihoods.

As this disaster continues to develop and relief efforts move from disaster response to disaster recovery, the ELCA will continue to walk with our companions. Please check back here to learn about these efforts and continue to keep the people of the region in prayer.

No one has been able to say specifically why * on February 4th fighting broke out at the disputed Preah Vihear between Thai and Cambodian military forces, but the outcome has been a handful of deaths and injuries on both sides and 1500+ families fleeing from their homes. In response to this displacement the ELCA, and partner organizations, have given financial support to Life With Dignity (LWD), our local partner on the ground. The funds will be used set up a camp to provide stable conditions for temporary housing, clean water, sanitation and food.

The hope is that the fighting will not escalate further and thankfully there has been a ceasefire in effect since February 8th. At the moment the goal is to help people momentarily displaced while they wait to return home. Please join us in praying for the people of the region that they may find peace in this period of uncertainty and that the two sides may find a peaceful and agreeable solution.

——
* Though the reason for the recent outbreak of violence is not know the general reason for tensions stem from the Preah Vihear temple sitting on a disputed stretch of border between Cambodia and Thailand. The dispute has gone on since France withdrew from Cambodia in 1953, was heightened in 1962 when the International Court of Justice ruled the temple to be on the Cambodian side of the border and peaked in 2008 when UNESCO accepted Cambodia’s bid to list the temple as a World Historical Site, a move Thailand disagrees with.