The following is written by Daudi Msseemmaa

An earthquake, mass displacement, low-latitude tropical cyclones, COVID-19, a plague of locusts – 2020 has been a year of calamities in East Africa like no other. Among the most destructive and widespread for ELCA companions in the region was flooding.

In Rundugai, Tanzania, the water came quickly. After enduring a season of heavy rains on Mount Kilimanjaro and the plains to the west, water coursed over saturated ground in the valley between Mount Kilimanjaro and Mount Meru. The water rose suddenly on the savanna, soaking the earthen walls of people’s homes and soon washing away goats, cows, and even houses.

People ran for safety to their neighbors on higher ground. Some needed rescue, and neighbors were the first line of support.

In the hours and days after, people who lost everything needed shelter, food, and hugs. They assessed the damage, digging through the mud where their homes stood, searching for treasures and missing livestock. At this time, neighbors took the lead in helping each other. In Rundugai, they took in those who had lost their homes and they fed those who lost their food stock.

For communal societies across rural Africa, sharing is instinctual, even if it leaves you hungry. The immediate needs of the flooding stretched resources of even those who were on higher ground and less affected. This is where external support becomes essential – relieving pressure on neighbors and relatives who gave their all helping the most stricken.

The Support of the Church

Rundugai is in southern Hai District, which they say is the poorest and most climate-averse part of the Evangelical Lutheran Church in Tanzania (ELCT) Northern Diocese. Members of the local church went to every household in the parish to conduct an assessment and determine who most critically needed support. Through three villages, they waded through thigh-deep mud and water in some places to reach 151 households that were severely affected. The local church appealed to the district church office. A week after the flood, they sent over 14,000 pounds of maize and 1,700 pounds of beans.

The floodwaters remained, with the main road into Rundugai not passable for six weeks. After trucks could again enter, the diocese office sent another round of  food for distribution.

The ELCT national office was kept informed of the situation. The flooding was widespread, and the church proposed a coordinated response and reached out to the ELCA. Through Lutheran Disaster Response (LDR), they funded relief in the Northern Diocese as well as five others – the Meru, Mwanga, Ulanga-Kilombero, Lake Tanganyika and South Eastern dioceses. Roads and boats were used to  reach the most distressed, who often are women, children, and people with disabilities. Additionally, LDR supported major flood responses in Kenya’s Tana River and Kisumu counties around the same time.

Another affected area was Kilwa, on the Swahili coast in the Lindi region of Tanzania – a rural, undeveloped, and mostly Muslim corner of the country. People who lost family members and homes were evacuated after the floods. Hundreds took refuge in schools that had been closed due to the COVID-19 pandemic. The church distributed food and non-food items and offered training on hygiene practices.

But now, several months after the water receded, the impact is being seen as new churches have sprouted in areas of flood response. “You’d be surprised to see the long-term effect of disaster response,” said Bishop Lucas Mbedule of the ELCT South Eastern Diocese. People who didn’t know about Christ or the church could see God’s love in action.

LDR support comes alongside the dignified work that is already in place – that of neighbors helping neighbors in crisis. Local churches took special donations for purchasing food for those who lost everything. Relatives stepped up as best they could. In our vision of accompaniment, the ELCA lives into its role as a companion when it walks alongside brothers and sisters in their moment of need, stands with them in prayer, and remains hopeful of what arises out of disaster.

Daudi Msseemmaa is the ELCA’s regional representative for East Africa. He lives in Arusha, Tanzania, with his wife and children.

A Traditional View on Seasons of Hardship

The following is an excerpt from the newsletter of Daudi Msseemmaa, the ELCA’s regional representative in East Africa.

Rural people are accustomed to cycles of plenty and poverty. Livestock keepers, like the Maasai who live in my region, are even more so. During a severe drought in 2008-2009, I spent time in dusty villages where the carcasses of livestock littered the ground and hungry children fainted in class. There was a lot of suffering. But I did not encounter hopelessness, even among malnourished mothers whose couldn’t provide enough breast milk for their infants. They had a saying – God is far, but he is very near. 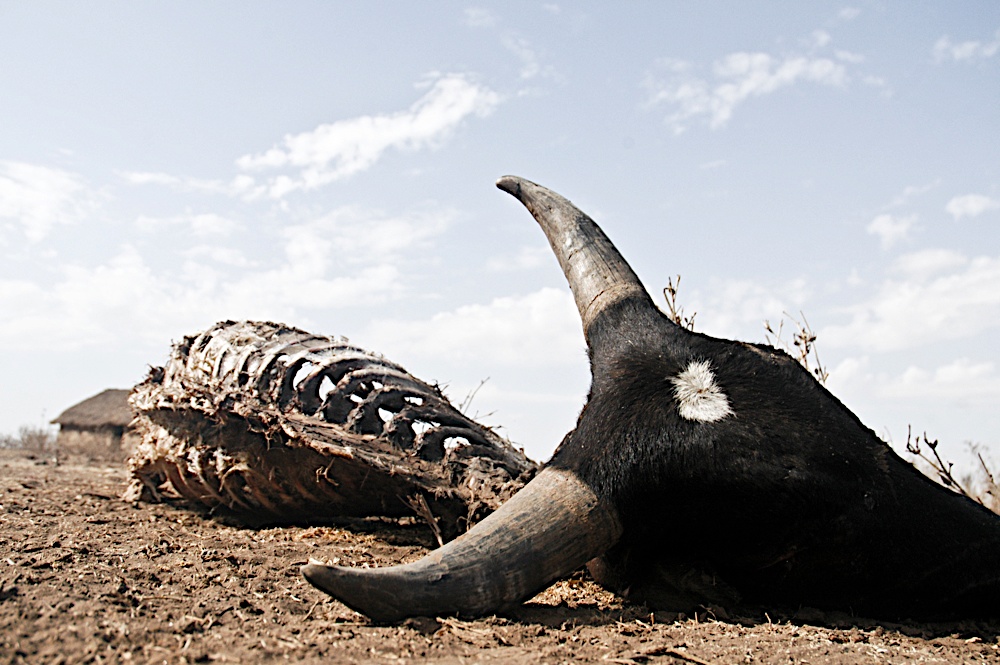 I recently recounted that memory with one of my elders – a theologian named Rev. Gabriel Kimirei. He said that in the Maasai traditional religion, there’s a belief that in the good times God is near with all his communal blessings. In the times of drought and communal suffering, God is far. But even when God is far, it won’t be long before he comes back.

This is not to minimize the suffering that our brothers and sisters go through in those seasons of hardship. There is no healthy outlook or ideology that will help you pass painlessly through losing loved ones or being unable to feed your children. It’s a hopeful posture through pain – understanding that it is a season that will pass.

In times like these when the coronavirus has taken so many lives and battered so many economies, and when flooding and locusts plague parts of our region, it would be easy to say that God is far. But our Christian tradition tells us God is a very present help in times of trouble (Psalm 46). God never leaves us. Still, adopting the cyclical way of seeing life can help us avoid despair during seasons like this. It requires breaking free from a linear way of looking at life as a journey from Point A to Point B or looking at time as the steady march of progress. In this view, life is instead like a circle, moving us all through despair and hope.

Daudi Msseemmaa is the ELCA’s regional representative for East Africa. He lives in Arusha, Tanzania, with his wife and children. 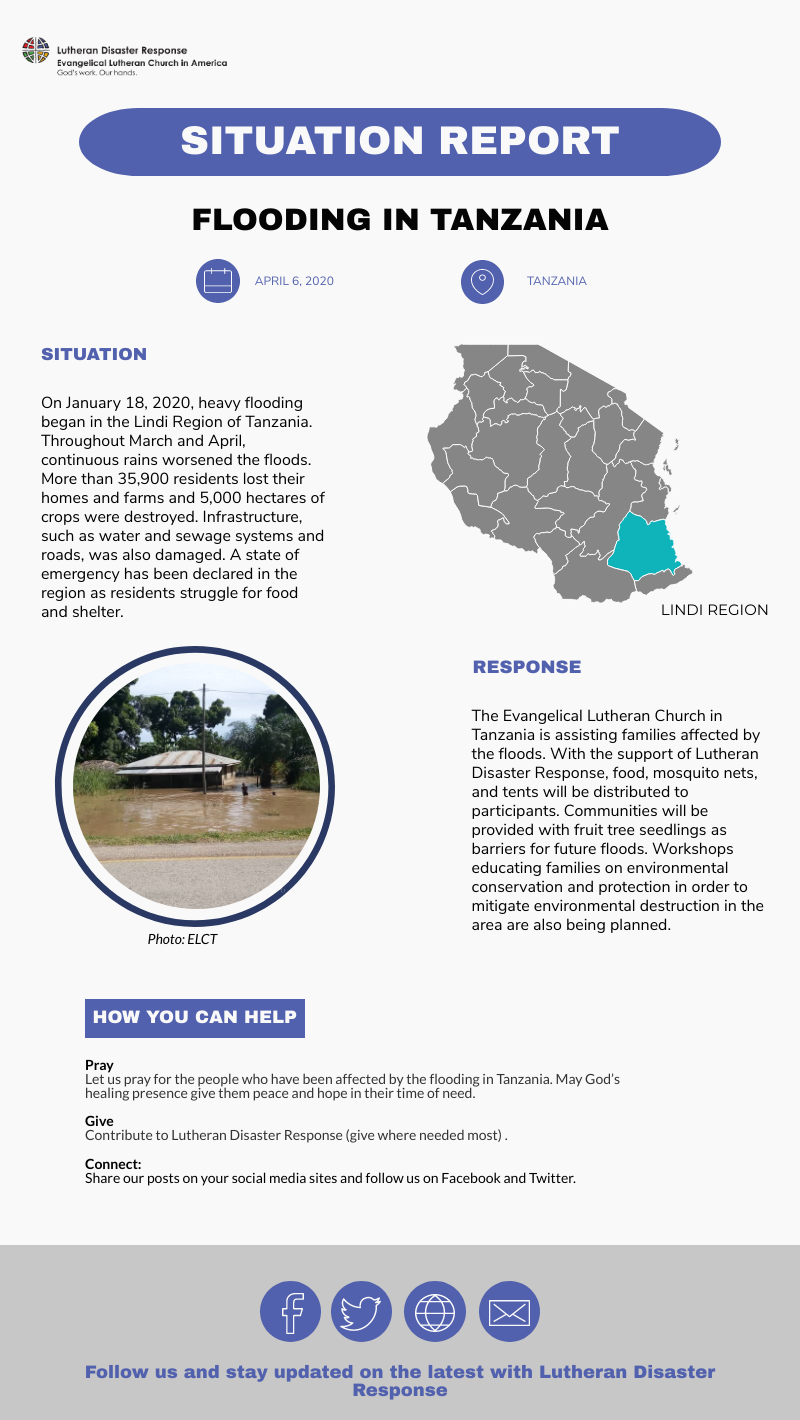 Pray
Please pray for people who have been affected by the flooding in Tanzania. May God’s healing presence give them peace and hope in their time of need.