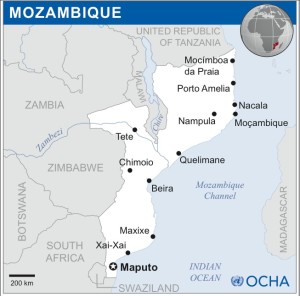 In late January/early February heavy rains in region of southeastern Africa led to swelled rivers and heavy flooding in Mozambique. One of the hardest hit areas has been the Gaza Province in the south of the country, particularly along the Limpopo River. Over 140,000 of the nearly 170,000 people displaced country wide are from this province, as well as 38 of the 55 deaths. The situation is distressing since this is still early on in the rainy season for the region, which extends from January to April. As of this past week there have been reports of coming rains continue to affect the region, with fears of even further flooding.

The Lutheran World Federation, of which the ELCA is a member, has been responding. In fact, the LWF was the first humanitarian actor to reach some of the more affected areas, helping to assess the extent of damage and needs in affected communities. The response has also involved distributing mosquito nets, blankets, kitchen equipment, water purification and hygiene kits. The LWF is also looking into supplying seeds to affected farms, since 40% of crops have been destroyed by standing flood waters. There has also been a spike in cholera cases in affected areas.

To learn more about the situation and the LWF’s response, check out their blog: Mozambique Floods Feb 2013.