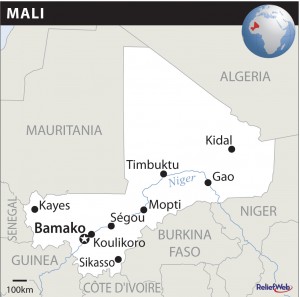 According to the World Bank more than 17 million people in the West Africa Sahel region are now facing food shortages and possible starvation. The most affected countries are Mauritania, Niger, Mali, Chad and Burkina Faso where poor rainfall and food shortages have driven the prices of staple foods beyond the ability of the poorer members of society to afford.

Along with the current situation of drought and food insecurity there has been continued violence in Mali and Niger that has forced 300,000 people from their homes. Many of these are finding refuge in neighboring countries. Almost 160,000 Malian refugees have been registered in neighboring countries. Of these over 61,000 are in Mauritania at the Lutheran World Federation-managed camp of Mbéré.

The need in the region is still great and it is believed the food security crisis will not peak until late summer/early fall. As we gather in worship and within our individual prayer life, please continue to lift up the people of this region and those who work on their behalf. In the midst of conflict and drought may God grant them strength, peace and lead them into safety.

World Bank: Drought Worsens in the Sahel Region | LWF: 16th Sitrep on the Crisis in the Sahel
————-
Gifts to ELCA International Disaster Response allow the church to respond globally in times of need. Donate now.