The UN’s High Commissioner for Refugees (UNHCR) has released a new map showing the approximate numbers and locations of refugees from the Ivory Coast. The numbers continue to be high, particularly on the western edge of the country as people continue to be wary of returning. I was struck not only by the high numbers of refugees, but also by the distances some of them had to traverse and that the Internally Displaced People (IDPs) within Cote d’Ivoire.

The ELCA is working with its companions, the Lutheran Church in Liberia, Lutheran Development Service (LDS) in Liberia and the ACT Alliance to help those fleeing from the violence. To date the ELCA has allocated $60,000 towards the ACT appeal to meet the needs of the 175,000+ refugees in Liberia. It has also allocated $10,125 to help the Lutheran Church in Liberia rebuild part of the church’s Lutheran Training Center which was damaged by the war and a severe windstorm.

Hopefully as the new government begins to take form Ivorian citizens will begin to see in their country fertile soil in which to plant their trust and hopes. And perhaps the helping hand shown by neighboring countries may continue in a tradition of good will and friendly relations. 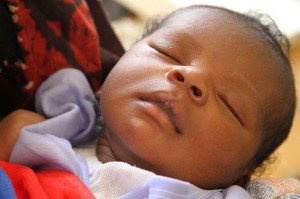 Pierre Konkunse, born in a Liberian refugee camp on April 6.

Amid the swirl of events in the Ivory Coast (president-elect Alassane Ouattara to be sworn in today, claims that the last of the forces loyal to ex-president Laurent Gbagbo have been put down and the expected start of trial for Gbagbo this coming week) the Ivorian refugees and internally displaced persons (IDPs) have taken a bit of a backseat. Yet there are still an estimated 177,000 refugees (mostly in Liberia) and 238,000 IDPs (mostly in Western Cote d’Ivoire).

It was expected after the capture of Gbagbo that these numbers would go down, but despite the efforts of those within the Ivorian government and international aid organizations, they have remained fairly constant as the Ivorians who fled fear the violence is not over.

The ELCA has been working with its partners in the ACT Alliance, particularly the Lutheran World Federation, within Liberia to help meet the refugee needs there. It is hoped that as things begin to settle to a new sense of normalcy these refugees and their IDP brother and sisters will feel secure enough to return home to help move their country into its next chapter. During this interim time, let us keep these people in prayer, that the spirit of God may comfort them and ease they fears, that the strength of Christ may steel them for coming months as they begin the long journey to a home that for many may seem more new than old.

To learn more about the situation read the UN OCHA Situation Report #4.

To gain a perspective of what the refugees have gone through read the story of baby Pierre (pictured above). This story, from the ACT Alliance, tells of his birth as a refugee in Liberia and the struggle of his mother, grandmother and great-grandmother to escape the violence.