We remember and pray for all those affected by the Nepal earthquakes six months ago. Two powerful earthquakes struck the country, with hundreds of aftershocks, killing more than 8,500 and leaving millions of people in need of humanitarian assistance. As a church, through Lutheran Disaster Response, we have been and will continue to respond to the immediate and long-term needs of the people of Nepal. 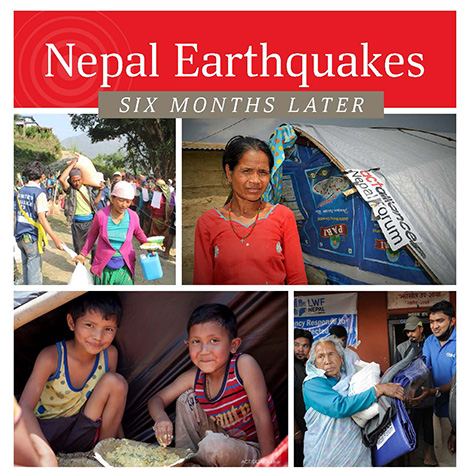 Lutheran Disaster Response works with an extensive network of partners who are actively engaged with communities on the ground. Within days after the first earthquake, we were able to respond to those affected. And six months later, we are still there, continuing our work with The Lutheran World Federation, Lutheran World Relief and United Mission to Nepal.

The Nepal: six months later resource provides stories and more detail into our immediate response and a look toward the long-term work being carried out.

Through your prayers and financial support, you helped bring hope and healing to our Nepal neighbors in their time of need. Thank you. Please continue to pray for and support the people of Nepal as they continue to not only rebuild their homes, but their lives as well.

The Rev. Daniel Rift
Director, ELCA World Hunger and Disaster Appeal
P.S. Share this resource or bulletin insert with your congregation as we continue to walk with our brothers and sisters still recovering from the Nepal earthquakes.

A delegation of church leaders is making their way from Santiago to Concepcion, bringing prayers and fellowship in the areas hardest hit by the earthquake.  Here are a few of their reflections.

As we departed we joined hands and Pastor President Gloria Rojas of the IELCH (Evangelical Lutheran Church in Chile) led us in prayer asking God to accompany us throughout the journey.

In general the trip was calm and faster than we had thought, though we were surprised by the damage to the highway, the large cracks, roads bulging up, bridges that no longer served as bridges and more than one drop in the road to remind us that we needed to take it slow.

3. In Talca our first meeting was in a low income community, where from the outside it did not seem that there had been a lot of damage, but as we listened to people’s testimonies we were surprised by the level of pain and need that was inside the houses.

It is what we call “the Earthquake that Lies”.

We met with a pastor in Talca, his face still reflected a very painful experience and his strong embrace expressed gratitude for the visit of his brothers and sisters who said: “Pastor, you are not alone, we bring affection, greetings, and solidarity from thousands of people both in Chile and abroad.”

Dear friends, the journey was not tiring, what was tiring was to see the faces of anguish of the people and to hear their fears about aftershocks. But we are encouraged by the testimonies of solidarity, of how they see in us the hope of assistance, but above all what is valued is:  that you are here with us.

With an embrace, feeling each one you close.

Haiti – a reflection from Florida

Mary Delasin is one of the Synod Hunger Leaders in Florida-Bahamas Synod.  This Synod has been instrumental in the Haiti Earthquake response as the companion along with the ELCA of the Lutheran Church of Haiti.  I’m sharing a recent note from Mary sent to Hunger Leaders. Thanks Mary for letting me share your note.

Thanks everyone for the continued prayers and support for Haiti.

note from Mary Delasin, Florida-Bahamas Synod :
Lots of exciting things are happening with the Haitian relief effort! Louis Dorvilier, Director of ELCA Disaster Response, is in Haiti right now working with the pastors of Eglise Lutherienne d’Haiti (Lutheran Church of Haiti). It is a model for how accompaniment can work on a grand scale. They are setting priorities together and working together to carry out a plan that is sustainable in the long term. And working to meet the immediate needs of the people in spite of the overwhelming situation. All of the Haitian pastors and people I have spoken to are all very clear, they want sustainable change for the long term this time. They are tired of so many organizations who do not get past immediate aid, and do not work to change life through sustainable solutions. So often things are looked at through the eyes of what we would want vs. what Haitians need to rebuild a better life for generations.

So much of what we learned in (our Hunger work)  is applicable to Haiti.  In seeing close up what those World Hunger and Disaster Response funds support, there isn’t a better way to truly make an imprint on this planet for generations to come. God is good. May He richly bless you all in your work!

I am Assistant to the Bishop in the Indiana-Kentucky Synod, ELCA, with responsibility for our companion relationship with the IELCH (Evangelical Lutheran Church in Chile). Today, one of the Spanish-speaking members of our Global Mission Committee spoke with a son of Pastora Gloria Rojas, Presiding Pastor of the IELCH who lives in Santiago. Cell phones have not been working in much of the earthquake area; interestingly many land lines have been fine. Pastora Gloria has been able to connect with most pastors of the IELCH and reports that they are without injury, including Pastor Oscar Sanhueza, who serves in Concepcion, near the earthquake epicenter. We pray for the people of EPES, the IELCH, and Chile as they seek to stand on the firm foundation of God’s gracious promise of resurrection and new life.

Check out the update from Lutheran News Service at:

Thank you for the prayers and continued concerns for Chile.

Unbelievable to wake up this morning to the news of the Earthquake the impending possibilities of impact from a tsunami.   As with Haiti and so many other situations, the ELCA has a connection to what is happening.  We have two dynamic ways through which we (ELCA) have been present in Chile, both as church and as community organization.

Our Global Mission folks (both in the churchwide office and in the region) have been connecting through-out the morning with folks in Chile, and in Peru (where the church has been actively supporting those who are being evacuated due to the Tsunami warning).

More information will soon be posted at www.elca.org/disaster.

Information on how one can give to help in this response will be at that web link as well.

Prayers…. in addition to your fervent prayers for all whose live have been shaken by this quake, and the family of those who have been lost,  please also pray specifically for the following:
The partner organization of the ELCA who works in providing access to health services, the Popular Education in Health Foundation (Educacion Popular en Salud – EPES), reports that they have been unable to reach five of their workers in the earthquake area.