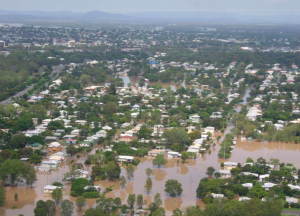 Flooding in Queensland. Image from LCA

Earlier this month the Australian state of Queensland, composing the northeast portion of the country, was hit with major flooding along its eastern sea border. It was considered some of the worst flooding the area has seen in over 35 years.  In reading the news coming out from the area I’m reminded of Katrina and the devastation ravaged on New Orleans.  What also reminded me of Katrina is reading about how the local churches and population as well as people from across the county have been volunteering time and talents to help those affected by the flood.

Below are two articles written by Linda MacQueen, editor of the Lutheran Church in Australia’s (LCA) magazine The Lutheran. The first one highlights the personal story of Trevor Ruthenberg as he lends a helping hand. The second describes how local churches are playing an immediate role while still looking forward to how they can address the long-term needs caused by the flooding.

To read more stories check out the LCA site’s coverage of the flooding and response: Floods Disaster 2011