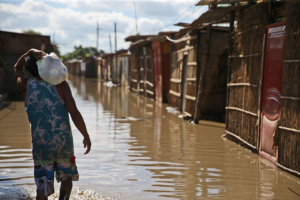 The phenomenon, named “Coastal El Niño” came after a period of severe drought, was attributed to unusually high temperatures in the Pacific Ocean, and was considered an expression of the growing challenges of climate change. 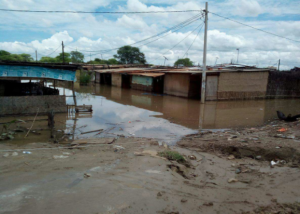 El Niño is a periodical event characterized by higher than average ocean temperatures in the equatorial tropical Pacific. A more localized version is the “coastal El Niño,” it brings unusually warm ocean waters which fuels heavy rains across the country.

Poverty is one of the main problems in the country as a whole. A third of the Peruvian population lives below the national poverty line. This adds up to about 8 million people.

Poverty, deficient nutrition, and a lack of even the most basic medical care are the reality for a large percentage of Northern Peru population; almost half the children in the region suffer from chronic malnutrition.

Thousands of houses in communities living in poverty were severely damaged or completely destroyed. Damage was worse in the cities of Piura and Trujillo where rising floodwaters reached the central square.

The Lutheran Church in Peru (IL-P) decided to play a role in the recovery phase of the emergency, The response had two stages:

Phase I: Following the catastrophe, in the last weeks of March and the first weeks of April 2017, IL-P organized communities and groups provided immediate relief spontaneously, by delivering, clothing, footwear, and non-perishable food by the limited economic possibilities and resources of IL-P members.

Phase II: In a more organized and strategic way, in the year of the 500th Anniversary of the Reformation, the emergency response was extended Trujillo, Chiclayo, and Piura. Pastor President of IL-P Rev. Pedro Bullon visited the affected communities several times to accompany them, praying, giving consolation and empathy; and encouraging affected families to be an active part of the recovery phase.

IL-P Council decided to work jointly with all the churches of Lutheran identity, regardless of the different traditions or origin. In 2017 Lutheran Global communion commemorated the 500 anniversary of the Reformation. IL-P believed that the best way to commemorate the anniversary, was to continue to rebuild homes, jointly with other churches. The decision to share resources with other congregations was the first a step in the process of transformation. A long chain of solidarity and sharing of resources start at that moment.

In a partnership between Lutheran Disaster Response and IL-P, emergency assistance was shared in the form of construction materials such as adobes, roofing sheets, battens, Portland cement, sand, gravel, stone,  and other supplies. The goal of the project was to address some of the extreme housing needs of vulnerable individuals and families in the three localities (Piura, Chiclayo, Trujillo) by providing materials for families to self repair damaged homes.

Continue to pray for all those impacted by floods and other disasters.