ELCA Blogs / Disability Ministries / “Who Are You!” 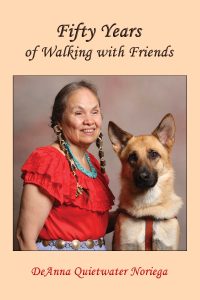 DeAnna Quietwater Noriega is half Apache and a quarter Chippewa. She is the mother of three, two daughters and an adopted blind son. She was the eldest of five children in a close–knit American Indian family. As a result of congenital glaucoma, she became totally blind at the age of eight.

DeAnna was mainstreamed in public schools in Texas, Michigan, and California. She completed a bachelor’s degree in social science and did a year toward a master’s in social work at California State University Stanislaus. While attending college, she taught independent living skills to the blind for the California Department of Vocational Rehabilitation. She worked as a caseworker in Santa Clara County, California, before joining the United States Peace Corps. DeAnna and her sighted husband met while attending college, and Curtis joined her in the Peace Corps. They worked together to establish a school for blind children in the independent nation of Western Samoa.

Upon her return to the U.S., DeAnna spent the next seven years at home, raising children. During this time, she became active in the American Council of the Blind and in Guide Dog Users, Inc. She taught braille, instructed breastfeeding mothers as a La Leche leader, was a friendly visitor at nursing homes, and worked as a volunteer intake clerk at the welfare office.

After 14 successful years, they sold the restaurants to move to Colorado, where their two daughters were enrolled in college. DeAnna kept busy working as an instructor of braille and independent living skills with an adult education program in Colorado Springs. She remained active in many organizations of the visually impaired, serving as an officer at local state and national levels. She served as a founding board member of a nonprofit organization that opened a blind center in Colorado Springs. She established The Braille Books to Keep project for blind children in both Oregon and Colorado.

DeAnna has been a guide dog user for over 50 years and has taken an active part in passing legislation protecting service animals.

By DeAnna Quietwater Noriega, an excerpt from Fifty Years of Walking with Friends

My uncle always described us as assimilated traditionalists. Men in our family went in to construction or the military. These were acceptable choices for warriors. Those who worked in construction usually left their families during the months when the building trades had work. They returned home in winter. Military families went with their men when possible and returned to the reservation when they weren’t allowed to go to posts in war zones.

My father was a master sergeant in the army and a full blooded Apache. My mother was born on the Isabella Reservation in Mount Pleasant Michigan. She is Ojibwa. My grand father was a six-foot 8-inch Full blooded Ojibwa who left the reservation to find work. He and my grandmother lost two of their 8 children to malnutrition and disease as toddlers. My mother was their first surviving child. She married my father at age fifteen and followed him to California where I was born when she was seventeen.

When I was four, I was living in Louisiana and had a black baby sitter. I asked her why her skin was such a pretty dark color. She said that god had made her with chocolate. White people were made with vanilla. I asked what flavor I was and she said a ginger snap.

When I was in the first grade living in San Antonio Texas, my teacher went around the room using last names to illustrate emigration. When she came to me, she said “Your ancestors probably came from Mexico.”

I shook my head and replied, “No, I don’t think so, I think we didn’t come from some other country but were always here.” I told her we were native Americans. My classmates asked if my parents wore paint and feathers. In all innocence I answered “Only on Sundays.” My mother wore a hat to Church with feathers on it. She used makeup then too.

When we were away from the reservation, people assumed my mother was Hispanic and tried to speak Spanish to her. My Apache grandparents spoke Spanish. I learned a little as a preschooler. I was lighter skinned than my brothers, favoring my maternal grandmother.  I often confused people who weren’t familiar with my Apache face. I have been mistaken for someone from the Philippines, or asked if I were Caribbean, Samoan, or even Eurasian. Until the flower children began viewing all things Native American as mystical, it wasn’t popular to be thought an Indian. People living near reservations held negative opinions of us, believing we were all alcoholics, came from broken families and obstinately held to beliefs that were little better than ignorant superstitions. Children were placed in schools where they were forbidden to speak their native languages. They were shipped far from home and forced to conform to mainstream religion and cultural beliefs. If we wanted to learn more of our culture, we had to make an effort to seek out elders who would teach us.

This has led to a gradual decline in the numbers of native people who remember who they are. Somethings I have learned by watching the adults in the family are:

Babies and young children are people too. They should receive the love and attention of the family. Native American babies aren’t left to cry but move from loving lap to lap. Small children are encouraged to master tasks to add to the well being of the family because all hands can make contributions.

Elders are to be respected and listened too. They have survived many things and can offer much wisdom.

If you have something and another doesn’t, then share. Gifting your little extra will come back to you someday when you may need it.

You are as the great mystery has made you. Value the gift of life and make the world a better place for having been born in to it.

Don’t fear death, it is just another change like birth. Just because we don’t know what to expect doesn’t mean it won’t be good.

We aren’t superior to our brothers and sisters who walk on four legs or swim in the streams or fly. All living things are equally the children of the maker. That is why we owe them respect if we take their lives to live.

These are the gifts I carry in my heart as I walk the world and they define who I am as much as my dark hair and high cheekbones or the fact that I became totally blind at age eight.

Working toward the full,just and equitable involvement of people living with disabilities in our congregations and in society by preparing leaders- equipping congregations- connecting people.