Posted on May 8, 2019 by Congregational Vitality

“After this I looked, and there was a great multitude that no one could count, from every nation, from all tribes and peoples and languages, standing before the throne and before the Lamb, robed in white, with palm branches in their hands. They cried out in a loud voice, saying, ‘Salvation belongs to our God who is seated on the throne, and to the Lamb!’ ”  — Revelation 7:9-10

Christ Lutheran Church in Visalia, Calif., is a church transformed. In opening hearts and doors to a ministry among the community’s Lahu people, the congregation has become a two-expression congregation moving toward the future with hope and promise.

The first step was to welcome a worshiping community of Lahu people. The second step was to join with the Lahu community to support and encourage the Rev. Samee Singkeovilay, who became the first ordained Lahu pastor in the Evangelical Lutheran Church in America, in April 2018. Soon after, he became the mission developer pastor for the Christ Lutheran Lahu Ministry, a Synodically Authorized Worshiping Community sponsored by the Sierra Pacific Synod. 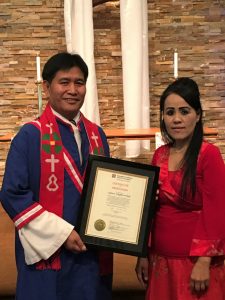 The Rev. Samee Singkeovilay, shown at his ordination, along with his spouse, Nakor Singkeovilay.

Nestled in the San Juaquin Valley near the Sierra Nevada foothills, the city of Visalia is home to the largest concentration of Lahu people in the United States: about 2,000 (out of a total of 130,000 people). This is the largest number of Lahu people outside of Asia. Most Lahu in Visalia have family ties to Laos and surrounding areas in Southeast Asia. As such, “the people pretty much know each other and most people are related to one another,” said Singkeovilay. His ministry focuses on building connections with and among this close-knit community.

But the connection goes deeper. The Lahu Ministry’s 40 worshiping families recently joined Christ Lutheran Church, en masse, transforming Christ Lutheran into a church with two expressions. This two-expression church comprises a collaborative partnership between a historically European-origin community and a newer community of Lahu people who, by adding their culture and heritage, have expanded the outreach and ministry potential of Christ Lutheran Church.

Glimpses of the future

The impact of Singkeovilay’s ministry is one reason for this connection. Bishop Mark Holmerud of the Sierra Pacific Synod, who ordained Singkeovilay, sensed his faith and commitment to serving the Lahu people of Visalia at their very first meeting, to consider his candidacy. “Pr. Samee is the kind of servant leader who gives me hope for the future of this church. At his ordination, several pastors from his TEEM [Theological Education for Emerging Ministry] cohort traveled hundreds of miles to join in the service. That spoke volumes to me of the impression he made on his classmates and their support for his journey to be ordained to serve at Christ Lutheran.”

With the transformation into a two-expression church, Christ Lutheran reflects the vision of the future that the ELCA is pursuing — to truly reflect the diversity of its community and the country and to seek to grow relationships with all God’s people. “Pastor Samee, as the ELCA’s first ordained Lahu pastor — and the Lahu community as a whole — are gifts to our church, not only in terms of diversity, but also more important, in terms of what we can learn from their contribution in mission and hospitality. I am very encouraged and inspired by this new mission partnership, a witness of missio Dei being lived out,” said Valeriano.

“Christ Lutheran is planting the seeds, serving as an example for vital congregations with two expressions to spring up all across the country,” said the Rev. Pongsak Limthongviratn, program director for Asian and Pacific ministries at the ELCA. 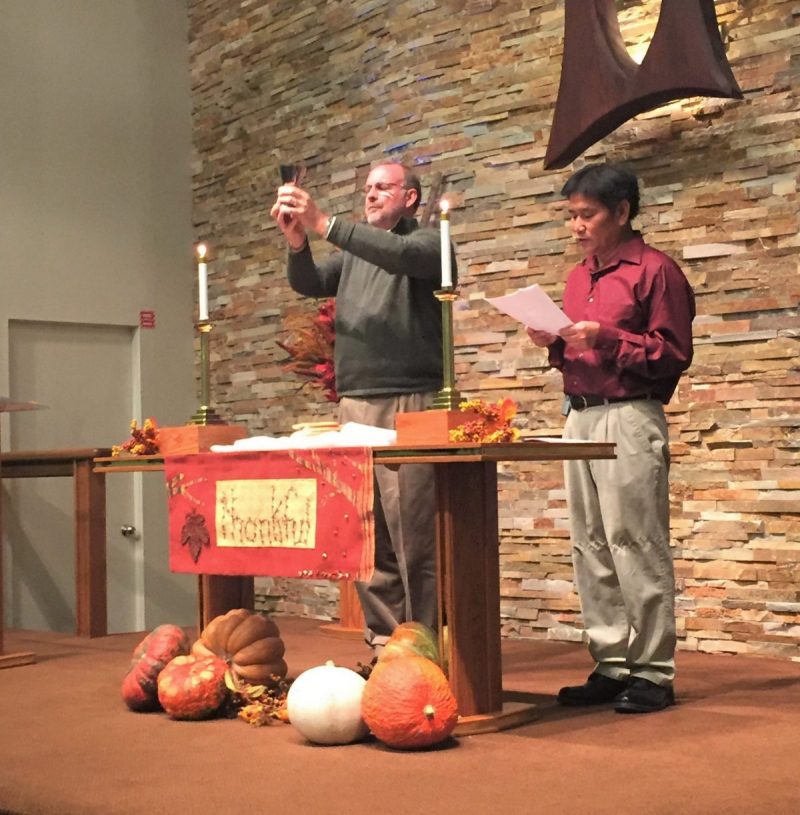 Singkeovilay has been involved in the Lahu worship community for many years. The appeal of the ELCA began in 2009 when Singkeovilay, serving as worship leader, began to seriously consider going to seminary. Eventually he came to realize that, “in order for me and the Lahu to do ministry effectively, I should go through seminary and become an ordained pastor.” In 2011, with the encouragement of Christ Lutheran Pastor Brian Malison and Lahu elders, he made his decision. “Christ Lutheran Church members and leaders were a driving force for me to pursue becoming a Lahu pastor in the ELCA.” Over the next seven years, while working as a custodian in the Visalia Unified School District, he worked to complete the TEEM program of Pacific Lutheran Theological Seminary.

Christ Lutheran initially supported the Lahu community by providing space, which Singkeovilay and the Lahu elders feel “opened the door for the Lahu people to learn, to study the Word of God and to grow.” In time, as church leaders witnessed the depth of Singkeovilay’s ministry and the potential to reach more people, the church stepped up to do more, and to build greater connections between the two communities. To date, this has mostly meant shared worship opportunities as well as spiritual and financial support for Singkeovilay’s seminary path. But a greater partnership is in the works.

The Lahu worshiping community has found that getting involved in Christ Lutheran’s ministries has been “one of the best ways to learn from one another and share the Lahu culture and heritage,” said Singkeovilay. Experiencing the culture of the Lahu has been a blessing to the English-speaking community. “The Lahu remind everyone that (1) God’s church is multi-faceted and multi-ethnic; (2) saying you are inviting and actually being inviting are two different things; (3) grace is the common language that binds us, even though we speak different languages; and (4) the future of Christ Lutheran Church is going to look different now that the Lahu are a part of CLC,” said Malison.

With its two expressions, Christ Lutheran is showing intentionality. It is beginning to live the vision of the future, now. The combined church has an end goal in mind, much like the vision of the church presented in Revelation (chapter 7: 9-10), which describes a multitude from every nation worshiping God together. “We have just begun to make plans and create strategies for greater ministry impact within our community, but I am sure that whatever that looks like, it will be beyond anything we would have thought of as a church before our formal merging,” said Malison.

Holmerud and Valeriano of the Sierra Pacific Synod have been a source of encouragement for Christ Lutheran as it begins to explore its path forward. Singkeovilay is thankful for this support, realizing, “there are people working behind the scenes to help me and to encourage me. Thanks be to God—through the prayer and support from Christ Lutheran Church, the synod and the ELCA, I can do more pastoral care to the Lahu ministry.”