Irma Banales: A journey of faith 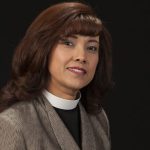 Irma Banales has walked an interesting path to become a pastor in the Evangelical Lutheran Church in America. She currently serves as director for evangelical mission for the Northern Texas – Northern Louisiana Synod. But her journey began in Mexico.

Banales was born in Durango, in north central Mexico, the eighth of ten children. Her father was a bracero, a seasonal agricultural worker permitted into the United States for temporary work. When Banales was about 5 years old, her family moved to north Mexico to Ciudad Juarez, south of the border and across the Rio Grande from El Paso, Texas. Her father was working in the Dallas area.

Banales was raised with certain Catholic traditions: “Every evening before we went out to play with friends, we were expected to pray the Rosary. Doing so ensured that we could have a merienda [snack] when we came back home: coffee, atole [corn meal mush] and homemade tortillas de harina [flour tortillas]. So we hurried up and prayed!”

Nine years later, the family moved to Dallas to live with her father. It was challenging for Banales to adjust to life in a US school, not knowing the language or culture. “I remember the first day at school, I was totally lost; I didn’t know English. They just sent me to classes. We were not allowed to speak Spanish or any other language than English.”

Banales is the only pastor in her family. She was ordained in 2014 through the TEEM (Theological Education for Emerging Ministries) program of Pacific Lutheran Theological Seminary, Berkeley, Calif.

Her introduction to the Lutheran church came as an adult. In 1998, she was married and raising her second child when an acquaintance invited her to attend a Bible study. Banales didn’t know it was a Lutheran Bible study until it was nearly over. She was intrigued. So she visited the church, St. John/San Juan Lutheran, for worship. “I liked the liturgy, the sermon and the way they welcomed me and my children, and the fact that all could be part of the communion and serve during the service.”

Experiencing Lutheran Bible study and worship were the first steps to becoming an ELCA pastor. Working for the synod helped to seal the deal. In March 1999, Pastor Susan Rodriguez at St. John/San Juan suggested that Banales apply for a position as receptionist at the Northern Texas – Northern Louisiana Synod office. She had no idea what a synod or a bishop were, and had many other questions. She was very nervous after she got the job. “I thought they were going to let me go in a week, because my English was terrible.”

She did not lose her job. Instead, a year later, Banales moved from half-time receptionist to full-time assistant to the mission director. In the meantime, she began taking classes. “I wanted to learn as much as I could about God and the Lutheran church.” She remains thankful for the continual encouragement of Tyna Oslie, synod administrator, throughout her educational pursuits.

Five years later, Banales became the synod’s Hispanic coordinator, working in that capacity for another five years. At the same time, she served as volunteer youth director at her home church, took TEEM program courses through both PLTS and LSPS (Lutheran Seminary Program in the Southwest, in Austin, Texas, a program of Wartburg Theological Seminary [Dubuque, Iowa] and Lutheran School of Theology [Chicago]), and continued raising her two children. She graduated from PLTS in May 2014. 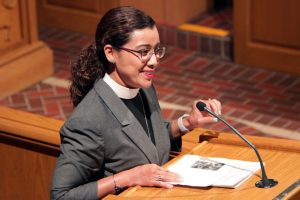 At some point along the way, “I fell in love with the ELCA,” Banales said. After attending so many classes and serving as synod Hispanic coordinator, people started asking why she was not enrolled in seminary. So she started the candidacy process. “I wanted to grow in my spiritual life, learn more about theology, and be more helpful to the people I was working with and serving.”

Banales loves the ELCA “because of the theology, the diversity, and the inclusiveness. We are traditional, liberal and conservative at the same time: like saints and sinners.”

In January 2013, then-Bishop Kevin Kanouse asked Banales to serve First Sagrada Familia in Garland, Texas, a two-expression congregation, as a SAWL (Synodically Authorized Worship Leader), where she ministered until 2017. Also, in 2017, “God blessed me double,” because, at the suggestion of Bishop Erik Gronberg, she applied for (and got the job as) DEM for her synod, and married her husband, “my angel, David.”

Banales feels blessed to accompany churches and leaders in their joys and sorrows. The journey continues.

The Congregational Vitality team shares stories and learning to inform and inspire and provides training information and guidance on vitality grants.