I was the kid whose parents had to drag him kicking and screaming to nearly every youth event, but whose parents also had to drag him kicking and screaming all the way home because I never wanted to leave. It was true for my first week of summer camp in 6th grade. It was true for confirmation class and youth group. And it was even true for my experience as a teenager at the Youth Gathering in 10th grade. 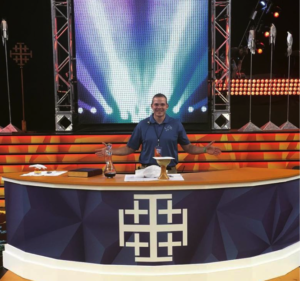 We had a small youth group at my church growing up, but we were tight. Our youth directors, Mike and Amanda, were my heroes. I wanted to be like my pastor, Pastor Billy, when I grew up. But when it came to boarding a plane and flying to St. Louis, well, I could think of better things to do. In hindsight, I was just afraid of something so big and so new. We boarded a plane just over the border from my western New York home in Pennsylvania. It was the first time I’d been on a plane in my entire life, and thank goodness they weren’t charging for baggage in those days. I definitely would have gone over the limit with the bag of nerves, fears, and worries I was bringing with me.

You know how this story ends. When we arrived in St. Louis the most amazing thing happened. Like he had so many times before, Jesus met me in my worry and reminded me that I was precisely where I needed to be—dancing at the crossroads. Tens of thousands of youth and adults were embodying love and celebrating community in Jesus’s name. When I heard people talk about the Youth Gathering before, I assumed it was a bunch of speakers and various Bible studies. And it is. But I discovered that it’s also so much more. The Gathering is the late night devotions with your church in your hotel room. The Gathering is splashing with strangers in a pool. The Gathering is high-fiving police officers on the street. It’s racing around a convention center trying to figure out how you can squeeze it all in. It’s skipping a meal and eating pizza at midnight so you don’t miss a thing.

Jesus used the Gathering to change the course of my life, and he would do it again several years later. I was still in school, but this time it was seminary instead of high school. I was given an opportunity to serve with the Safety and Security Team at the 2009 Gathering in New Orleans. Following that gathering I became the team leader, and I am very excited to serve in that role for the third time in Houston in 2018. I’m excited because, in hindsight, I was afraid of something so big and so new, but I’m not afraid anymore. I’m excited and deeply honored to be a part of a ministry where youth can so clearly see Jesus and become his body for the sake of the world. And I know now what the kid whose parents dragged to the airport 16 years ago didn’t. The Gathering is a bunch of speakers and some Bible study, but it’s so much more. It’s everything from the fundraising and getting ready to the going home and telling the story. And the work of the Safety and Security Team of the Gathering is to make sure that participants, like youth groups skipping dinner and eating pizza at midnight, still don’t have to miss a thing.

Houston is one of a kind, a great host city for the Gathering, and I can’t want to see you there. 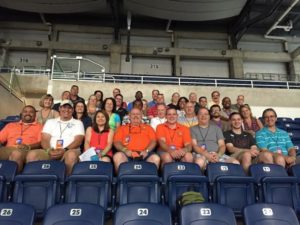