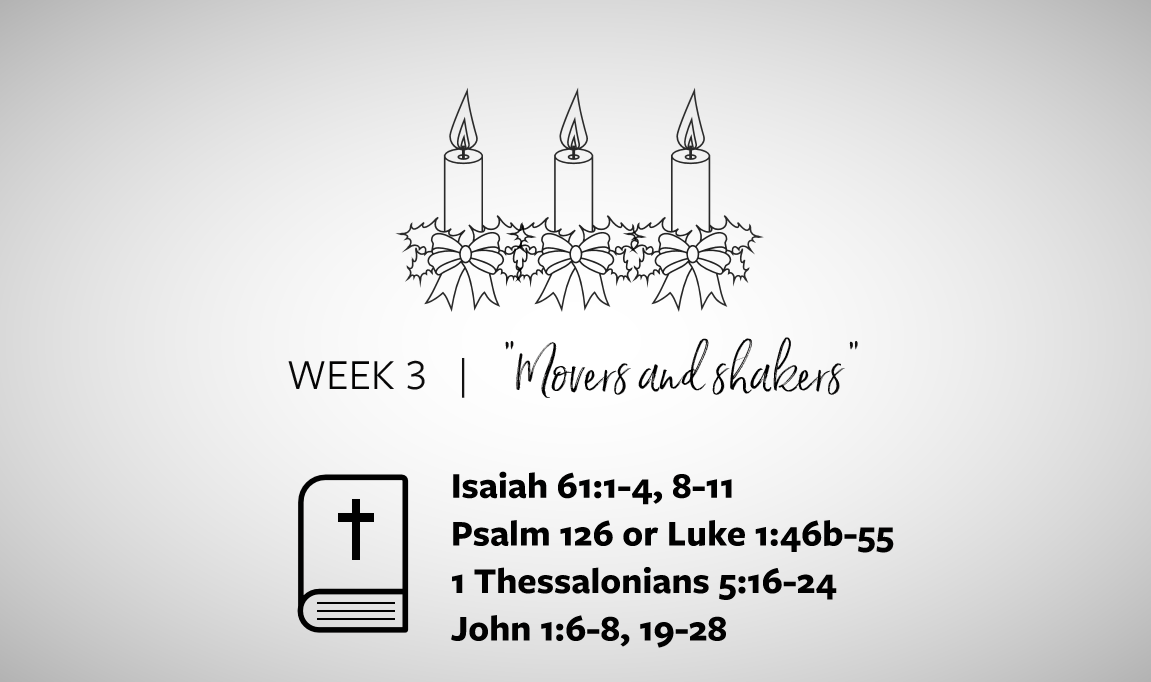 Have you ever thought of the “movers and shakers” in your community? This is one collective term we often use to describe the people we think of as powerful, important or effective in their leadership. Perhaps they have enough money to buy whatever they want or need. Perhaps they have a seat at important tables where decisions are made. Perhaps they have friends in high places or are in positions of influence.

These are the people who “keep the world turning.” At least, that’s what most of us think.

The Gospel reading this week describes John the Baptist encountering people sent by the Pharisees as a sort of screening committee, checking his references and reviewing his qualifications for ministry. “Are you Elijah?” they ask. “Are you the prophet?” (John 1:21). John the Baptist replies in the negative. He is simply a camel-hair wearing, locust-eating “voice of one crying out in the wilderness” (John 1:23). Yet, this “voice” is one of the most important the people can hear at that moment. The questioners go away dissatisfied; clearly, this crazed man does not have the pedigree it takes to be baptizing and preaching.

Pharisees often get a bad rap in Christian Scripture and history, though they were devout Jews, who believed sincerely in God’s law and God’s promises. Until the middle of the first century, they were known for their ministry among the people in what might have been called the working class of Palestine. Like John the Baptist and other Jews, they knew what Isaiah has prophesied about “good news to the oppressed” (61:1) and “the year of the Lord’s favor” (61:2).

Yet, the people God chooses to work through in Scripture are often not the people we see as successful, powerful and important. They are tax collectors, shepherds, fishermen, women, craftspeople and even former criminals who would barely merit a second glance in the temple – unless of course, the temple authorities wanted to throw them out.

Yet God lifts them up as disciples, prophets, rulers and priests.

So often, our attention is focused in the wrong places, and we miss what God is working on in our midst. Our eyes are on people with wealth, power and influence – at least, the kind of wealth, power and influence our culture deems worthwhile – and we can fail to see the transformation God is enacting in the overlooked spots in our communities. While the Pharisees were looking for salvation in other places, a poor young woman from an unimportant town was carrying a child that would announce the Advent of Isaiah’s promise.

As many of us look to the traditional centers of power for signs that the world is turning, the world is already turning in our communities. In Minneapolis, youth participating in St. Paul’s Lutheran Church’s Young Leaders Program are taking part in the transformation of their community through art, gardening and entrepreneurship. The word “youth” often implies negative stereotypes – too young, too unruly, too childish. But at St. Paul’s, the community knows that “youth” often means creative, intelligent and motivated leadership – the kind of leadership that can change a community for the better.

Their world is turning because God is working through youth and adults who know that real power is not always found in the places we expect. Their work is supported in part by ELCA World Hunger.

While Advent is a season of waiting for the fulfillment of God’s promises, the Gospel of John, the prophecy of Isaiah and the song of Mary (Luke 1:46b-55) invite us to recognize that God is already at work, “moving and shaking,” in communities our stereotypes about power might make us overlook.

God of all our hopes, we wait with expectation for the coming of your son into the world. Forgive us for the ways in which we have been blinded to your presence by worldly wealth and success. As we long for Christmas Day, keep our eyes open to your presence in our midst – in one another, in our neighbors, in the people at our doors. Open our hearts to receive the promise you reveal to us through each other and all creation. In your holy name, we pray. Amen.

All Earth is Hopeful ELW 266

My Soul Does Magnify the Lord ELW 882

To download this entire study, or to see some of our other congregational resources, please visit www.elca.org/Resources/ELCA-World-Hunger. 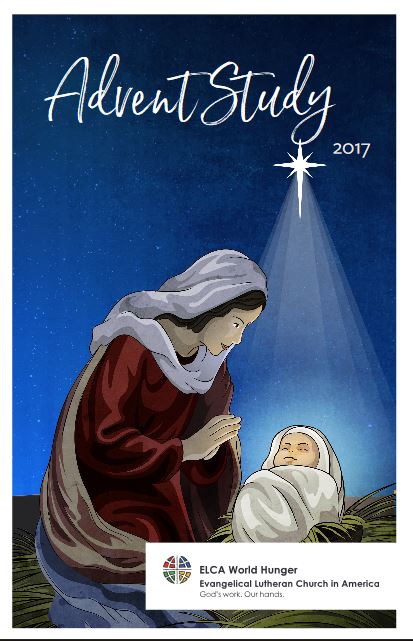