The Poor People’s Campaign: A Time for Lutheran Action

By The Rev. Amy Reumann, Director of ELCAadvocacy

They tried to bury us. They didn’t know we were seeds.

On Monday, May 14, 2018, thousands of people of faith and low-wage workers will gather in Washington, D.C. and more than 30 statehouses across the country to kick off the Poor People’s Campaign: A National Call for Moral Revival. This initiative seeks to move poverty to the top of our national cons 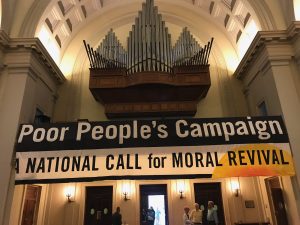 ciousness through energized grassroots organizing that will expose, confront and take aim at forces that keep people in poverty. At this moment of rising income inequality,this campaign brings together the moral power of organized people of faith, the voices of those living in poverty and the urgency of addressing our national priorities.

The Rev. Dr. Martin Luther King Jr. planned the original Poor People’s Campaign of 1967-68 to build on the momentum and strategies of the civil rights movement to address the denial of human rights and dignity to Americans trapped in poverty. Moved by the struggles of people and communities he encountered in his journeys, he sought to bring together low-wage workers, faith leaders and activists to highlight inequities and demand our nation prioritize programs that support workers and jobs, access to housing and a war on poverty. The initiative lost momentum after the assassination of Dr. King.

Fifty years later, in 2018, a new Poor People’s Campaign is growing up from the seeds that Dr. King planted. The campaign will address the roles that systemic racism, ecological devastation, the war economy and militarism play in perpetuating generational poverty in the U.S. As a faith community initiative, it is bringing together religious leaders who will engage in mobilization, advocacy and civil disobedience to make their voices heard. Read more about the 2018 Poor People’s Campaign.

The Rev Dr. William Barber and the Rev Dr. Liz Theoharris, the campaign leaders, are at the fore of a multiracial and interreligious coalition that will launch 40 days of protests and direct action on May 14. Over the course of these 40 days, causes, concerns and solutions to persistent and generational poverty will be highlighted through marches, worship events and nonviolent direct action. The initiative seeks to change the moral narrative in our nation, from blaming poor people for their own poverty to involving them in solutions for it. The campaign highlights the role that entrenched systemic racism plays in perpetuating poverty and the result of a national budget that prioritizes military spending at the cost of anti-poverty programs. The renewed campaign also takes on environmental degradation and promotes sentencing reform as areas where our collective moral voice must break through for change.

The 2018 Poor People’s Campaign is bringing together Lutherans who are concerned about the increase in income inequality in our nation, the intersections of poverty, race and environment and the toll of cuts to anti-poverty programs on their communities and church members. As a new, faith-led grassroots movement by which to advocate on the local, state and federal level, it offers congregations a new way to act to address hunger and poverty. It highlights the urgency of this moment for action with and on behalf of our neighbor.

The ELCA Social Statement on Economic Life reminds us that God calls us to seek sufficiency and sustainability for all. “For all” refers to the whole household of God—all people and creation throughout the world. Therefore, our economic analysis cannot stop with our own wellbeing, but must assess how economic activities affect “all,” especially people living in poverty. Scripture gives voice to the circumstances that keep people poor, whether social status, oppression or because of the greed and injustice of the powerful. The statement urges this church to “address creatively and courageously the complex causes of poverty.” The Poor People’s Campaign is a vehicle to help us do that in our day.

Too often, advocacy is speaking for others who are perfectly able to speak for themselves. As the ELCA, we prioritize advocacy that supports people with lived experience of poverty or oppression to tell their own stories, using voices that are often the most powerful in creating change. The Poor People’s Campaign offers an opportunity to accompany others in solidarity and urgency, in advocacy as the church for the world.

ELCA Advocacy will be highlighting the reflections and experiences of Lutherans involved in the next 40 days of action. Look for coming blog posts, or send us your experience. How is your faith a catalyst for your participation? What outcomes do you hope for? Who are your partners and what are you learning? Please send to washingtonoffice@elca.org.