Top Ten Quotes About Hunger and Poverty: Counting Down to the 500th – #6

Obviously, the Reformation was more than just Martin Luther. So, today, we are looking at a quote from another great Reformer, Andreas Bodenstein von Karlstadt, with thanks to the eminent Reformation historian Carter Lindberg, for lifting up this important figure in his book Beyond Charity: Reformation Initiatives for the Poor. Quotes from Karlstadt in this post are from Lindberg’s book and earlier translation.

#6 – “We should not tolerate but banish [beggars]; not in an unreasonable and tyrannical manner but rather with willing help so that we Christians shall allow no one to come into such poverty and need that he is afflicted and caused to go and cry out after bread.” 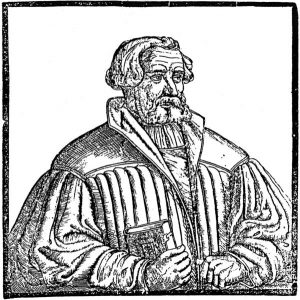 Andreas Bodenstein was born in Karlstadt around 1480. He came to be known more commonly by the city of his birth, Karlstadt.  A theologian by training, Karlstadt became dean of the theology faculty at Wittenberg in 1512, five years before Luther posted the 95 Theses. In 1516, he became familiar with Luther’s teachings in a debate in which Karlstadt argued against a student supporting Luther’s views. Over time, though, he came to embrace many of Luther’s reforms, becoming one of the first priests to get married. It didn’t all go smoothly, though, and Luther and Karlstadt often disagreed.

Karlstadt was officially excommunicated from the Catholic Church in 1520, along with Luther. He spent most of his remaining decades moving from place-to-place, at times preaching and at times working as a farmer or merchant, in between regular bouts of disagreement with Luther and other reformers. In 1541, he died of the plague.

Begging took at least two forms in Europe in the 1500s. First, there were folks who were poor by circumstance. These folks were unemployed, underemployed, or often, crippled by debt. In order to get the food they needed to survive and take care of their families, they sought the charity of their neighbors. Second, though, were various groups of mendicants, men and women who, as members of religious orders, took vows of poverty and were poor by choice. Mendicants relied on the charity of other Christians as they lived in and traveled through the towns of Europe.

Luther, Karlstadt, and other reformers had some major issues with the mendicants. Primarily, the difference was theological. The mendicant orders saw their chosen poverty as a good work that moved them along the path toward holiness. They then shared a piece of this holiness with other Christians through the charitable donations these other Christians made to them. For Luther and Karlstadt, though, this practice was, in Karlstadt’s words, “unchristian, fraudulent, and noxious” and ought to be banned.

Key to Karlstadt’s critique of the mendicants was his impression that the religious brotherhoods that practiced begging were deceiving people who were poor by circumstance. He argued that “they injure the poor with their demands for cheese, corn, bread, beer, wine and testament, and sorts of things.” Rather than work to earn their bread by their own labors, the mendicants, according to Karlstadt, were deceptively collecting it from people in poverty, who believed that their giving would merit God’s favor. Thus, both Luther and Karlstadt preached an end to begging and reserved special vitriol for the mendicants.

When it came to people who were poor by circumstance, however, the reformers were far more sympathetic. Knowing the tremendous economic challenges many in Europe faced at the time, Karlstadt and Luther urged the church to undertake coordinated efforts to address what we might call the root causes of poverty today – unemployment, medical care, debt, and lack of education. Beyond this, Karlstadt also argued that civil authorities bore responsibility toward people in poverty. Certainly, he argued, those who can work ought to work. But, he added, the civil authorities ought to “give them aid and help to begin their craft or work.”

We see in Karlstadt – and in Luther – an emphasis on addressing poverty at the root, as well as the need for a comprehensive response that included the church and the government in ending poverty and hunger.

This was nothing new at the time Karlstadt was writing (1522). In fact, right about this same time, the church in Wittenberg began the “common chest,” a literal chest that held donations to be used for poverty alleviation. In addition to the immediate relief needed to make sure people didn’t go to bed hungry, the chest was used to finance occupational retraining for people who were underemployed, no-interest loans to artisans, health care, and support for orphans. Luther wrote the preface to the ordinance establishing this first common chest and expressed his wholehearted support for the effort. Despite their many disagreements, he and Karlstadt at least concurred on this; in a city of Christians, there ought to be no begging because in a city of Christians, there ought to be no poverty.

Karlstadt and Luther had to carefully distinguish between mendicants and people in poverty. Their distinction wasn’t based on who deserved charity and who did not, but rather based on the calling of the church and the tenets of Christian faith. Mendicant begging was rooted in the notion that charitable giving was meritorious, that humans could, by the effort of a few coins or loaves, curry God’s favor. Nothing could be further from the gospel truth, for the reformers. Serving the neighbor was not something a Christian did because it earned them a place in heaven. Rather, it was a response to God’s gift of salvation, extended to humanity despite our inability to earn it. No work, no matter how charitable, paves a path to the sweet hereafter.

However, that doesn’t mean that Christians have no vocation toward their neighbors. On the contrary, it made seeking the well-being of the neighbor that much more profound. Consider this: if we believe that the primary purpose of charity is to earn our salvation, and we can do this with just a few coins here and there, we are likely to engage in charity without much thought to the good of the neighbor. Our primary thought will be our own good, the good that comes from our action.

But, if we believe that our salvation is secured and that because of this, we respond to God’s call to love and serve the neighbor and to seek the neighbor’s well-being, we are drawn a bit deeper, into looking at the sources of their need. This is precisely the place Karlstadt and Luther went. What makes begging necessary for so many people? Their challenge to the church and to people of faith individually was to not merely respond to the suffering of their neighbors but to end it. And that means devising systematic approaches to ending poverty and hunger, including working with civil authorities, whose responsibilities included ensuring that everyone in their realm was fed and sheltered.

Karlstadt’s quote points to this profound take on poverty alleviation. Indeed, the Reformation itself has many similar examples to draw on. It hints, too, at questions we ought to ask about our responses to poverty today. Are we working to ensure, as Karlstadt suggested, that poverty should be eliminated such that there is no need for begging? Or, is our charity an attempt at currying the favor of God, without a thought to ending the suffering of our neighbors for good? Profound questions, still today.