It’s Back to the Future Day!

I wish I could say that all the advice I have received has been profound and meaningful.  But the best advice I received in the late 1980s (indeed, the only advice I can remember from that particular time period) is “hoverboards don’t go on water.”  Needless to say, I have yet to find occasion when that little nugget might be useful.  But there was a time when my hope was built on nothing less than floating over sidewalks, self-lacing sneakers wrapped ’round my feet, while dodging holograms from every sign and marquee.

Still, not everything in Back to the Future II was that far-fetched.  We have Google glass, for instance, and video conferencing, and long-deceased rock stars performing concerts as holograms.  (Thankfully, $50 Pepsi is still a ways off.)

Today, movie lovers across the country will celebrate the trilogy that gave us Doc Brown, flux capacitors and the hope for flying cars.  Much has changed since Marty McFly first climbed inside a Delorean, but much has remained the same.  Here are some quick stats to see how far we’ve come from 1985, when Back to the Future was first released, and how far we still have to go as a nation. 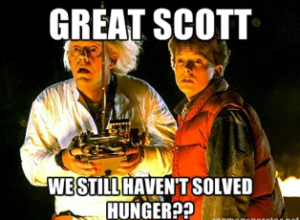 Poverty rate in the United States

Children’s (under age 18) poverty rate in the US:

*Statistics for 2015 are drawn from the most up-to-date data available, which in many cases reflects 2014 numbers.