President Trump released his budget proposal for Fiscal Year 2018 on May 23rd. The budget reflects many of the promises that then-candidate Trump made to reign in non-defense spending. One area facing deep cuts is foreign assistance, which can be found in the budgets of the State Department and the U.S. Agency for International Development (USAID). Investment in foreign countries that are affected by poverty and lacking economic development have historically been welcomed on both sides of the aisle. President Trump’s proposal poses potential threats to this important support for many of the world’s most hungry, thirsty, poverty-stricken, and vulnerable.

The savings in President Trump’s budget proposal on foreign aid total about $19 billion. This would effectively cut out one third of the current budget, resulting in the elimination of important programs within the State Department and USAID. The proposal includes reductions in global health programs and the complete elimination of the Title II program (emergency and development food aid). To many of us, it is difficult to put into perspective what consequences these kinds of changes in our budget can have, because we are not directly affected. 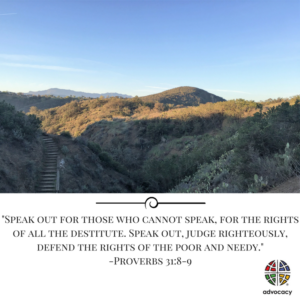 Why should we care about what the Administration wants to cut internationally, as Americans and as Lutherans?

As Lutherans, we are called to live out our faith by ensuring justice in social structures, because the Church has the responsibility to do so.[1] We acknowledge that “massive hunger and poverty, alongside abundance and wealth, violate the bonds of our common humanity”[2]. This encourages us to protect basic resources, including nutritious food and clean water, for our most vulnerable brothers and sisters around the world.

Lutherans have long served our neighbors in other countries. Through ELCA World Hunger, Lutheran Disaster Response, and partner organizations, we support investments in agricultural and sustainability, address emergencies when they happen, and work to support the development of resilient communities. Our commitment to these efforts is enhanced by encouraging members of Congress to also support these programs through foreign aid.

Through foreign aid, displaced peoples in Sudan that are affected by current civil war can access nutritious food for their families and plan for a future with hope. With these same programs, those living in poverty in Bangladesh can receive agricultural training to be more self-sufficient. Reducing international poverty through food aid has positive benefits that help to stabilize many of the weakest regions by providing the necessities to survive, like food and water.

The current cuts proposed make up less than 1% of the U.S. budget, but have huge implications for those around the world who need assistance. The good news is that, these proposed cuts are just that, only proposals. The power to make final budget decisions rests with Congress. Since they are elected officials, we as voters also have influence over the process.

As disciples of Christ, we prayerfully use our voices to speak with those who are called to serve in public office. As the budget process continues to develop in upcoming months, it is important that we stand up for those who do not have as loud a voice by encouraging a budget that serves the common good, both domestically and internationally.