Transformative Waters: The Flooding of the Umatilla River

“Water represents an integral link in a world view where water is sacred and extremely important in preserving precious balance. Water is the origin of and essential for the survival of all life.”

–Confederated Tribes of the Umatilla Indians

Water is crucial to our survival. But water can also be destructive. During a multi-day warm-up in February 2020, melting snow and heavy rains caused the Umatilla River and its tributaries to overflow their banks. They damaged homes and buildings in the Blue Mountain region of Oregon and Washington, which includes Columbia and Walla Walla counties in Washington and Umatilla County and the Confederated Tribes of the Umatilla Indian Reservation in Oregon. 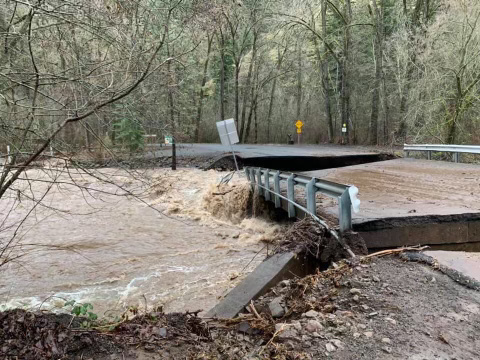 On both sides of the Umatilla river – Oregon and Washington – multiagency relief centers (MARCs) assembled in the days after the flood. At these locations, residents received immediate, relief  assistance and registered for long-term recovery support from various relief organizations. The state of Oregon declared an emergency and sent funding to each of the affected communities. FEMA offered both public and individual assistance in the days after the flooding. As the Washington side was less affected, they didn’t qualify for any FEMA assistance. In total, 579 homes were damaged, according to Charlene Larsen, a longtime volunteer and associate of the Lutheran Disaster Response network in Oregon and a leader in the Oregon Synod Disaster Preparedness and Response network.

Damage was great and so was the need for a long-term recovery group (LTRG), a common structure in the disaster response community that allows for a holistic response. Representatives from both sides of the river, as well as the Confederated Tribes of the Umatilla Indian Reservation in Oregon, came together to form the Blue Mountain LTRG. It’s a coalition of community organizations, with the local Lions Club, United Way of the Blue Mountains, Community Action Program of East Central Oregon, and the Blue Mountain Action Council involved. The LTRG also includes ecumenical partners and has disaster services from Lutherans, Methodists, Mennonites, Presbyterians, and Seventh-day Adventists represented. 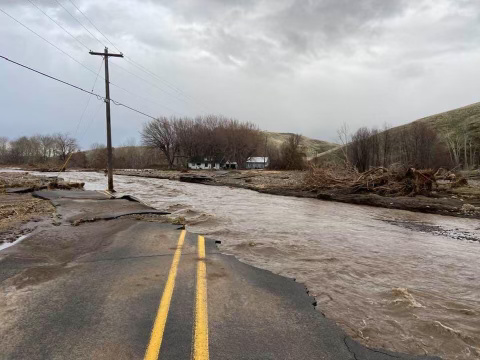 One of the members of the Blue Mountain LTRG is Pastor Joel Ley of Christ Lutheran Church in Walla Walla, Washington, representing the Northwest Intermountain Synod of the ELCA. About the assortment of organizations in the group, he says “We’ve got all these people represented at the table and it’s pretty impressive because that doesn’t always happen. People dig in and do the work and that’s really nice to see.”

By joining forces, the group could do things that one organization on its own could not. Larsen told one story about how members of the Blue Mountain LTRG worked together to get a couple a new pair of recliners. A couple living in a mobile home lost their set of matching recliner chairs and didn’t have the funds to replace them, so a disaster case manager brought the situation to the unmet needs committee. An unmet needs committee focuses on helping people address needs not covered by insurance or FEMA money. One of the members of the committee found an identical set of recliners in Washington and another representative from the committee offered to pick them up. At the home of the couple, yet another member was there to help unload them. The community spirit was present, now on an even bigger scale.

2020 was also an unprecedented year for wildfires in the Pacific Northwest. While the fires didn’t affect the same area impacted by the February floods, the Blue Mountain LTRG was in a position to assist other groups in the state. They shared “all the documents we put in place for bylaws and recovery efforts, talking about different committees that need to be in place,” said Larsen, speaking about the process for forming a long-term recovery group. Last February, the Blue Mountain LTRG formed with assistance from another disaster recovery group in Oregon and the wildfires gave them the opportunity to pay it forward and share their knowledge with newly formed disaster groups.

As with all disasters this past year, COVID-19 has affected the recovery process. Doing one-on-one in-person case management interviews became impossible. Rebuilding and repairing homes is more challenging than normal because volunteers are discouraged, and contractors are difficult to find. When it is possible to safely bring in volunteers, they will be busy doing small repairs, especially on fences, wells, septic tanks, and irrigation systems on agricultural land.

People in the area are independent – when in trouble, they believe that their family and neighbors will take care of them. Early in the recovery process, there was a lack of trust by residents for organizations that came to support them, said Larsen. But over time, that trust grew. Out of the original 579 cases, over 300 have been closed. However, many remain open, and for that reason, the Oregon Synod recently received a grant from LDR to continue case management for survivors. The grant will help fund an AmeriCorps position. The staff member  will serve as a case manager and assist with the formation of a Community Organizations Active in Disaster (COAD) for the Blue Mountain region. The COAD is an extension of the existing Blue Mountain LTRG. By building upon the relationships formed during the relief and recovery phases of the flooding, the COAD is preparing to respond to the next disaster right away and in so doing, contributing towards the community’s disaster resilience. 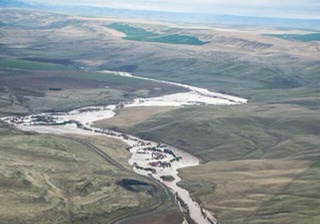 Catalyst. That’s the world Larsen used to describe the role of Lutheran Disaster Response in the Umatilla flood response and recovery efforts. An LDR-supported Oregon Synod Disaster Preparedness and Response network has been working to spread awareness about the importance of being ready for a disaster. At the time of its formation, its main concern was the Cascadia earthquake expected to hit the region at some point. But preparedness quickly turned into response, first with the Umatilla floods, then COVID-19 and wildfires. While there was still much to do to respond to the flooding, the Oregon Synod had a slight head start.

“LDR  is the catalyst in getting that going and now others are supporting with their funds. So, it takes one catalyst to get it started and, in this case, it was LDR,” said Larsen.

The importance of disaster preparedness was one of the biggest takeaways by both Larsen and Ley. In the Blue Mountain region, there was no preparation for flooding, or any other disaster, except for the early stages of the Oregon Synod Disaster Preparedness and Response network. The Blue Mountain LTRG had to form in the midst of the disaster. Ley said that it would be easier if relationships between the organizations were built beforehand. They both realize how unprepared the region was for disasters last February. A year later, with organizations coming together to form the Blue Mountain LTRG and COAD, they are confident in their readiness for the next disaster.

Water can give life and take away life. But water can also transform life. The waters of the Umatilla River transformed the Blue Mountain region. They brought different communities and organizations together to help everyone. They led to the establishment of an LTRG and COAD, which formed new relationships and strengthened old ones. The waters led to a transformation of how the region thought about disasters, preparedness, and the importance of long-term recovery.

“LDR has always billed itself as being in for the long haul and I had taken that message in, but I didn’t realize how important that was,” said Ley. “You do the initial work, but there’s a lot of stuff that hangs out there for a long time and without long-term commitment from LDR and other partners, there would just be a lot of issues that wouldn’t be addressed.”

In all responses, LDR strives to transform lives. From immediate relief to long-term recovery, LDR is present to support survivors and communities as they rebuild their homes and lives. Around the United States and around the world, communities impacted by disasters are transforming and becoming more resilient, ready for the next disaster.