Not waiting for the next tragedy

It happens every single day. Somewhere in our country, gun violence shatters a community, a neighborhood, a family. Almost 40,000 people died in 2018 from guns. That equates with a city the size of Annapolis, the capital of Maryland, struck down in a year – year after year.

Although written in 1995, the ELCA social message on “Community Violence” reads as if describing today.

“For some women and children, home is less safe than the street. Hate crimes continue. Neighborhood, schoolyard, workplace, or family disputes spark into violence and become lethal. They become headline news, reinforcing the atmosphere of violence and inspiring profitable entertainment media” (page 1).

Access to a lethal weapon intensifies the situation. Gun violence disproportionately impacts communities of color. Guns figure prominently in domestic violence and have been used to terrorize our children in schools. The proliferation of guns, assault weapons and the violence that ensues around these weapons is a thief in the night.

Our national reality is that the next tragedy can happen at any moment. Where is Congress? Where is the president? The realities of gun violence are not adequately in the forefront of policy discussion.

Congress and the administration should be debating and passing legislation now like: 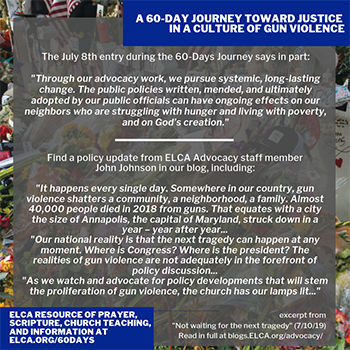 The sad reality is that in the current polarized political climate, the likelihood of meaningful legislation passing Congress is remote.  Nevertheless, the values of our faith tradition compel us to keep pressing forward. “Community Violence” adopted in 1994 states that the ELCA advocates in favor of gun control on the basis of the resolution on community violence adopted by the 1993 Churchwide Assembly, which called for “passage and strict enforcement of local, state, and national legislation that rigidly controls manufacture, importation, exportation, sale, purchase, transfer, receipt, possession and transportation of handguns, assault weapons and assault-like weapons and their parts, excluding rifles and shotguns used for hunting and sporting purposes, for use other than law enforcement and military purposes” (page 4 and footnote).

Legislatively, this means we particularly look for measures that will curtail the violence, including

As we watch and advocate for policy developments that will stem the proliferation of gun violence, the church has our lamps lit – like those waiting and ready in Luke 12:35. Our support and leadership can bolster our communities as we