Do Black Churches Matter in the ELCA? by Lenny Duncan

Do Black Churches Matter in the ELCA?

It might be a yes. Possibly with a caveat. Or a resounding no. Well, that will affect how you see this film.

So, this idea started as an independent study here at United Lutheran Seminary in Philadelphia. Like my exorcism work last year, it evolved. I was going to write a very sterile paper where I matched up the ELCA’s social statements, resolutions, and constitution with what we did with our money that year. The theological thinking behind it was going to be simple. Are we doing what we say we want to do? This was a simple task accomplished by looking at the history of what we have done. I would seek publication in some academic journal. It would have been powerful in its intent.

It wasn’t until I started chasing the story down (in the undercroft of the seminary, in arguably the most complete Lutheran Archive in North America) that I started to realize what it needed was impact. It also was too important of a story to be stuck in the echo chamber, which is theological academia. Edit: White Academia. Edit: White cis het Academia.

This would be the death of this story. Why is that? Because the systems that are in place, that are being analyzed in this work, would unconsciously fall into the same demonic patterns it always does. This work would be outright rejected, picked apart by some academic desperate to prove the church bears no responsibility, or it would land with a feather fall and not a seismic boom.

So, as I scrambled to get camera equipment, to record some interviews for ease of later access for my research, it hit me like a thunderbolt. A Movie. A documentary. This would be an easy media format to access for churches, synod assemblies and people just interested. I could put it in several pieces on YouTube for ease of consumption.

I contacted the incomparable Jason Chesnut at Ankos Films, for help. I bought a starter DSLR camera. I reached out to the composers in residence at United Seminary in Philadelphia, Tangle Blue, for some royalty free tunes and beats. It came together so easily the indwelling of the Holy Spirit had to be all over it.

I’m about almost through shooting so I can share with you the story so far.

It is about a church, and white Protestantism and its seeming collapsing in on itself. It is about a system that got so use to being at the very center of a democracy and society, and is no longer in that privileged position. It is about the way it has treated its Black pastors and churches. It is going to point to the fact that while we scream for diversity in the ELCA we have some systemic inequities in the way we launch, nurture, and treat these ministries. Its focus will be Philadelphia and its history (mostly). How at one point baptized membership here was 58% Black Lutheran.

It is about a seminarian who spent 2 years studying the confessions, our social statements, and this church before joining. It is about what I found when I arrived. It is about being a Black Lutheran from one person’s limited perspective. I am not in the film directly but I am there. We will look through my eyes.

It is not a complete history of the prophetic witness of my elders who have labored long and wearily in this field. However, it will point to the fields of littered bodies I found when I arrived, and it will honor the efforts of those who came before me. This will also be limited by my “newness” to this church.

I recently visited the African American History Museum with Judith Roberts our Director of Racial Justice Ministries in the ELCA. As we moved through the history of the subjection of black bodies in this country. As we waded through rivers of spilt blood, and marveled at torrential downpours of black resistance the importance of the work I am doing became clearer. I already was getting a sense that I was doing holy work. However, the prophetic witness of Black Lutheranism over all that I saw that day rang out like a song I could hear just around the bend of every corner there. We stood together under the flag of my great-great grandfather’s regiment in the civil war.

We waited in the long line to see Emmet Till’s coffin. The four of us who were gathered together that day stopped and prayed silently that day in front of the coffin as Mama Till’s words came out of a nearby speaker. We drew a direct line from Emmet to Trayvon Martin in our hearts.

I hope that in some way this movie can contribute to and not take away from, the beautiful mosaic that is Black Lutheran History.

My hope is to gain access to a deep sense of lament and well of ancestral power I am accessing.

It is about a church that has fewer resources. Less relevance. An uncertain future. Death nipping at its heels as it races towards resurrection.

It is about a church whose only chance for survival is to turn to the prophetic witness of Black Lutheranism, and the leaders and peoples it has treated as second-class citizens in the kingdom of God.

It is about suffering servants, elders of the diaspora, and communities squeezed by empire being the literal incarnation of Jesus.

It’s about whether or not a church can actually listen to the cries and wisdom of the historically oppressed.

It’s about, “Do Black Churches Matter in the ELCA?” 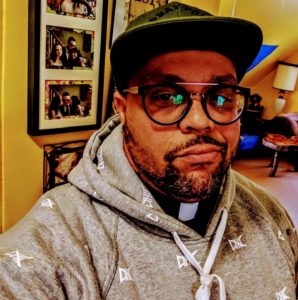 y Duncan is a Vicar at St. Mark’s Lutheran Church and Candidate for ordination to the office of Word and Sacrament in the ELCA. Formerly incarcerated. Formerly homeless. Formerly “Unchurched”. He is also the Evangelist for the #decolonizelutheranism movement, as well as a frequent voice on the intersection of the Church and the cries of the oppressed. He pays special attention to the #blacklives movement in his work, but also lifts the frequent intersection with other marginalized peoples.  He believes that the reason the ELCA has remained so white is a theological problem not sociological. He is currently an Mdiv Coop student at the Lutheran Theological Seminary at Philadelphia and holds a Bachelors of Biblical Studies from Lancaster Bible College, with an emphasis in New Testament theology.