From pitcher’s mound to pulpit 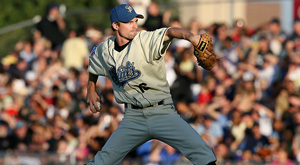 Ruud, 27, played five years with the independent St. Paul Saints of the American Association. During that time, he also earned a divinity degree from Luther Seminary in St. Paul.

“Charlie Ruud is, and always will be, a true Saint,” said Saints coach George Tsamis.

The Saints’ Web site calls Ruud “the most decorated pitcher in the team’s illustrious 17-year-history.” END_OF_DOCUMENT_TOKEN_TO_BE_REPLACED

Warm-up Question: Have you ever thought you did a good job following directions only to find out that you missed the bigger picture or objective? What were you doing? What were you were missing that was right in front of you the whole time?

Derek Jeter stood on the mound with teammates to begin the final farewell. Over 54,000 fans listened, as many had for decades to the voices of great baseball players like Lou Gehrig, Babe Ruth, Joe DiMaggio, and Mickey Mantle. The pre-game celebration included 21 retired players, six who are Hall of Famers, and the 92-year-old daughter of Babe Ruth who threw out the ceremonial first pitch.

Jeter encouraged the fans to take the memories from the old stadium to the new, which will be completed across 161st Street at a cost of $1.3 billion. While the new stadium will also be called Yankee Stadium, it just won’t be the same for longtime fans, who lingered in the stadium after the game. Even Yankee staff and interns stayed as late as 4:00am the next morning as they struggled to let go of the traditions and past.

Every aspect of the night was full of nostalgia, from Yogi Berra, now 83, appearing in a full vintage uniform, to the 1922 American League pennant being unfurled in center field. The Yankees have won more World Series than any other baseball team. The marquee outside the stadium simply read, “Thanks for the memories.”

Roger Clemens was not invited to attend, nor was his name mentioned during the ceremonies. His name has been clouded by accusations that he used performance-enhancing drugs.

But there was more to celebrate than not, and by the time the grounds crew dug up home plate in the early morning following the game, a picture of Babe Ruth winking played on the video board, “See you across the street!”

Scripture Texts (NRSV) for Sunday, October 5, 2008.
(Text links are to oremus Bible Browser. Oremus Bible Browser is not affiliated with or supported by the Evangelical Lutheran Church in America. You can find the calendar of readings for Year A at Lectionary Readings.)

Change is in the air. In the world of professional sports, where financial sponsorship is essential to survival, old stadiums are being torn down and replaced with new facilities named after corporate sponsors in most cases. (Even some public schools are using corporate sponsorships to fund buildings and programs.) One does not have to be a New York Yankee fan, or even a baseball fan to understand that one era has come to an end and a new era has begun.

One thing is for certain, no matter how exciting games may be at the new Yankee Stadium, cries will come from those who attended games at the old stadium: “It’s just not the same.” And with the Yankees missing the playoffs for the first time in 13 years, the legacy and history of success truly gives way to a new beginning. There is a tremendous opportunity to be a part of the new face of success, a new future. Still, there will be people who don’t understand and won’t participate in or support the new direction the organization is going, even in a beautiful brand new facility.

In our Gospel lesson today, we probably identify with the answers given by the crowds to Jesus’ question (vs. 40). Everyone understood that the wicked tenants mentioned in the parable were deserving of punishment; the point of the parable was so obvious!

The people listening felt connected to Jesus’ message, but they didn’t seem to realize that they were in the presence of the living, promised savior. How surprised they must have been, especially the chief priests and Pharisees, to realize that Jesus was talking about them when he said the kingdom of God would be taken away and given to those who produced the fruits of the kingdom.

These leaders who had been charged with keeping of the long history of Jewish tradition and teaching the rules missed the point though. Change wasn’t coming; change was present and happening. The fulfillment of God’s promises, and the continuation of God’s new relationship with his people, was standing right in front of them — Jesus.

Their role in the history of God’s chosen people was in jeopardy. They knew their duties and routines, but they did not yet know the savior and fulfillment of God’s promise, who was teaching right there in their midst. They thought Jesus was just another prophet, and that nothing had changed.

You and I have the benefit of living in a post-resurrection world. We are guided by the Holy Spirit to understand God’s will and relationship with us, and to produce the fruits of the Spirit. Even more so, we live as forgiven servants, met by Christ at every moment in every day. Christ finds us were we are and guides us to participate in the promises of his resurrection: new life, hope, and the ability to dramatically change how we live knowing that we are forgiven children of God.

How will we respond?

Merciful God, speak to us daily through your Spirit and guide us through your sacrifice in Jesus to be productive and loving servants in your kingdom. Amen