Today, September 27, the Patriarchs and Heads of Churches in Jerusalem issued a statement in support of HM King Abdullah II following his speech at the UN Assembly in NY on September 20. The speech raised concerns about threats to the Christian presence in Jerusalem.

In the letter they ask for the Members of Congress to “support the transfer of $120 million to USAID to meet the urgent humanitarian needs of the Palestinian people in 2022. These allocations are needed to cover the PA’s debt to AVH and the other East Jerusalem hospitals.”

Ask your Members of Congress to restore funding for Augusta Victoria Hospital and the other East Jerusalem hospitals (This form will give you a sample letter you can personalize and send).

Many Members of Congress visit Palestine and Israel in August — encourage your Members of Congress to visit Augusta Victoria Hospital to see first-hand the important work being done and the hospital’s partnership with the U.S. government through USAID. To schedule a visit to the hospital, contact LWF Representative Sieglinde Weinbrenner at sieglinde.weinbrenner@lutheranworld.org

Presiding Bishop Eaton wrote to Secretary of State Antony Blinken to express her “profound shock and sadness concerning the death of Palestinian-American journalist Shireen Abu Akleh in Jenin, the West Bank, on May 11 and the deplorable disruption of her
funeral procession on May 13.”

Bishop Eaton calls for an independent international investigation of Akleh’s killing and says “the Evangelical Lutheran Church in America reiterates its call for the United States to monitor and track gross human rights violations committed by Israeli armed forces and police and to ensure that U.S. military and financial assistance provided to the government of Israel be used in accordance with internationally recognized human rights standards. Instead of issuing statements, the U.S. government must take specific, concrete actions against Israeli impunity when these standards are not upheld.”

Join Bishop Eaton in taking action by writing to Secretary of State Blinken here. (The action alert will give you sample language that you can edit and personalize).

Association of Lutherans of Arab and Middle Eastern Heritage (ALAMEH)

Evangelical Lutheran Church in Jordan and the Holy Land (ELCJHL)

“The Evangelical Lutheran Church in Jordan and the Holy Land expresses deep heartbreak and devastation at the murder of cherished Palestinian journalist Shireen Abu Aqleh. Shireen’s voice proclaimed the truth about the occupation, persecution, and oppression of the Palestinian people that is so often suppressed by Western media and perceptions.
In the wake of her death, the reception of her mourning and funeral by Israeli occupation forces was cruel and unacceptable. A day of grieving that was meant to be a peaceful last goodbye from the Palestinian people to Shireen was stained with disgracing her body, attacking those in mourning, and an overall show of disrespect and brutality.”

“The World Council of Churches calls for an independent international investigation of the killing of Palestinian-American journalist Shireen Abu Akleh on 11 May, given the grave implications of this event,” said Sauca. “Those responsible for Abu Akleh’s death must be held accountable to the full extent of the law.”

“No fewer than 86 Palestinian journalists have been killed since 1967, the year in which Israel occupied the West Bank and Gaza – with 50 of them having been killed since 2000,” said Sauca. “Ms Abu Akleh had reported on events in Palestine and Israel since 1997, and had earned respect among viewers worldwide.”

On April 4, 2022 the Patriarchs and Heads of Local Churches in Jerusalem released this statement:

“Pray for the peace of Jerusalem: ‘May they prosper who love you. Peace be within your walls, and security within your towers.” (Psalm 122:6–7)

The seizure of the Little Petra Hotel by the radical extremist group Ateret Cohanim is a threat to the continued existence of a Christian Quarter in Jerusalem, and ultimately to peaceful coexistence of the communities of this city. The Heads of Churches have repeatedly warned of the illegitimate actions of extremists, who have followed a pattern of intimidation and violence.

In occupying the Greek Orthodox Church’s property, the Little Petra Hotel, Ateret Cohanim has committed criminal acts of break-in and trespass. They act as if they are above the law, with no fear of consequences.

This issue is not about the individual properties, but about the whole character of Jerusalem, including the Christian Quarter. The Little Petra Hotel stands on the pilgrim route for the millions of Christians who visit Jerusalem each year. It represents Christian heritage, and speaks of our very existence in this place.

Israeli radical extremist groups like Ateret Cohanim are already targeting and hijacking our beloved Old City of Jerusalem and imposing their illegitimate and dangerous agenda on all sides. We refuse this and we say: this will lead to instability and tension at the time when all are trying to de-escalate and build trust, to build towards justice and peace. Acts of coercion and violence cannot lead to peace.

An article about the situation, including a video of Heads of Churches (including ELCJHL Bishop Azar) visiting Little Petra Hotel can be found here.

ALAMEH statement on recent violence in Jerusalem and Gaza

The Association of Lutherans of Arab and Middle Eastern Heritage (ALAMEH) issued a statement today regarding the situation in Palestine and Israel.

ALAMEH encourages us to learn more about the situation: “If you want to help, the first step is to become informed. Seek out Middle Eastern members of your community who have a direct connection to the Holy Land. Engage your heart and mind, and take the time to read and understand beyond the headlines. Then contact your elected
representatives and make your voice heard.”

Read the full statement here: Statement of ALAMEH concerning the recent violence in Jerusalem and Gaza

Video: Support Peace with Justice in Palestine and Israel

“Violence between Israelis and Palestinians that we have witnessed in the past couple of days is a shocking escalation of the conflict…” begins Presiding Bishop Elizabeth Eaton in this video message. “In the context of Israel and Palestine, we are seeking a positive peace: peace with justice where human dignity is upheld and human rights are protected. We have a responsibility as people of faith who see all – Christians, Jews, and Muslims – created in the image of God to love our neighbor and to work for the common good.”
Use the Action Alert at https://bit.ly/ELCASupportPeace from the Evangelical Lutheran Church in America Peace Not Walls campaign to express your concerns and convictions to the president and lawmakers at this urgent and specific moment.
Here you can read the full video transcript: Peace in Palestine and Israel video transcript.

The Lutheran World Federation’s Augusta Victoria Hospital earned the “Beyond the Call of Duty for COVID-19” Response Recognition Program for proactively responding with outstanding and innovative actions in facing the COVID-19 pandemic.

Check out this video showing AVH’s response to COVID-19. 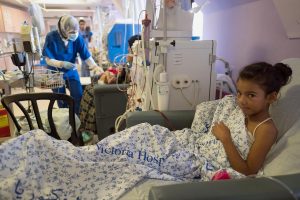 Eleven-year old Shahad receives treatment at the LWF-run Augusta Victoria Hospital (AVH) in East Jerusalem. AVH is the only hospital that offers pediatric hemodialysis for Palestinians from the West Bank and Gaza. LWF/Ben Gray

Leaders of Lutheran, Catholic and Episcopal (Anglican) churches in the United States have jointly called on the US President to restore vital funding for four church-associated medical institutions in East Jerusalem. By halting this humanitarian assistance “lives are being threatened unnecessarily,” they say in a joint statement issued on Nov 1.

One of the affected institutions is Augusta Victoria Hospital (AVH), which is run by The Lutheran World Federation (LWF). For decades, AVH, St. John of Jerusalem Eye Hospital and Princess Basma Rehabilitation Centre (Anglican /Episcopal), and St. Joseph’s Hospital (Catholic) had been assured of US humanitarian assistance. Recently, President Donald Trump’s administration decided to discontinue such support as part of a wider move to curtail funding towards Palestinians.

“These hospitals provide life-saving and, in some cases, unique forms of health care not available otherwise to Palestinians,” the church leaders say. They refer to kidney dialysis for children, state-of-the-art cancer care and pioneering rehabilitation centers for autism treatment as some of the critical services for the most vulnerable populations in East Jerusalem, Gaza and the West Bank.

The decision to discontinue funding “leaves the patients, the wider Palestinian community, and us disappointed and perplexed,” the church leaders add.

Above text from the LWF story about the statement

ELCA Conference of Bishops statement on Augusta Victoria Hospital and East Jerusalem hospitals is available here and copied below.

In early September, members of the Conference of Bishops of the Evangelical Lutheran Church in America (ELCA) were saddened and dismayed to hear reports that the U.S. government was planning to discontinue financial assistance to Augusta Victoria Hospital and five other East Jerusalem hospitals.

We appreciate and strongly affirm ELCA Presiding Bishop Elizabeth Eaton’s Sept. 6 letter to Secretary of State Michael Pompeo, calling for the “release of $25 million of U.S. FY 2017 funding that will help to ensure that there is no interruption in the treatment of Palestinians at the East Jerusalem hospitals, especially the most vulnerable cancer and kidney patients referred to Augusta Victoria Hospital (AVH) from Gaza and the West Bank.”

She noted that, as an institution owned and operated by the Lutheran World Federation (LWF), “Augusta Victoria Hospital is able to operate because of the support of LWF member churches, like the ELCA, and long-standing partnerships with countries like the United States. In the last decade the U.S. government, through USAID, has invested nearly $10 million in AVH to bolster its capacity as a cancer center. In addition, the U.S. government has provided over many years tens of millions of dollars in aid to help cover the costs of the cancer patients and others referred to AVH and the other East Jerusalem hospitals.”

Eaton stressed the urgency of U.S. government action, saying: “The delay in the disbursement of the 2017 funding for the East Jerusalem hospitals is contributing to an acute and severe cash-flow crisis for AVH and the other hospitals,” and that immediate release of the funds is necessary “so that AVH can make payments to pharmaceutical suppliers of cancer medications, pay staff and avoid any interruption in the treatment of patients.”

In the past several weeks, neither the LWF nor the ELCA have received any official announcement about the status of this funding and, therefore, we appeal to President Donald Trump to instruct the U.S. Department of State to release this vital funding so these patients will receive the treatment and care they need.